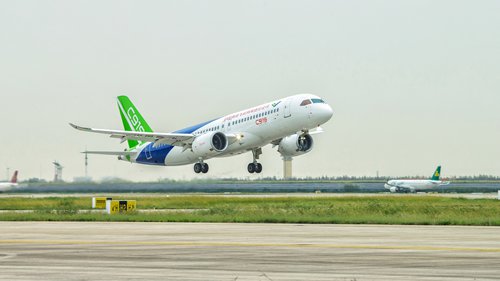 China and the US have signed a bilateral airworthiness agreement after years of negotiations, with the deal taking effect on October 17, according to the Civil Aviation Administration of China (CAAC).
The agreement points to China's advances in the civil aviation industry and improvements in industry standards and could pave the way for domestic commercial aircraft to enter mainstream global markets, Chinese experts noted on October 24.
The CAAC said in a statement on Monday that the airworthiness agreement between the US Federal Aviation Administration (FAA) and the CAAC was reached in late September.
Under the agreement, Chinese and US regulators achieved "full, reciprocal recognition" of each other's civil aviation products, including airworthiness certification, according to the statement by CAAC.
Specifically, the agreement covers the airworthiness examination and approval of design standards, production oversight, export airworthiness, technical support and other areas of cooperation, the statement said.
Airworthiness is the measure of an aircraft's suitability for safe flight and the basic requirement for any aircraft to be allowed for flight. China and the US signed an airworthiness agreement in 1991, but terms under that agreement were not fully reciprocal because the US did not fully recognize Chinese authorities' airworthiness measures, the People's Daily reported on April 28.
But the new agreement, coming after three years of negotiations between the CAAC and the FAA, changed that.
"The signing of the [new] agreement laid the foundation for deeper and broader cooperation between the two countries' civil aviation authorities and created a positive bilateral environment for the exchange of the two countries' civil aviation products and the cooperation of the countries' industrial sectors," the CAAC statement read.
The new agreement could pave the way for the rise of China's civil aviation industry in the global market, which has been dominated by US and European companies, Chinese experts said on Tuesday.
The agreement could help the export of China's domestically developed planes such as the C919 and the ARJ-21, both produced by the Commercial Aircraft Corp of China, according to the experts.
"All new aircraft have to obtain airworthiness certificates before entering the market, and currently there are two widely recognized certificates: one from the FAA and the other from the European Aviation Safety Agency (EASA)," Lin Zhijie, an independent market watcher, told the Global Times on Tuesday.
Lin added that although the CAAC has been issuing airworthiness certificates, the procedure was not fully established or widely recognized. Signing of the agreement with the FAA means a big step that could hopefully speed up the export of the large passenger jet C919 to mainstream markets abroad.
According to Lin, the ARJ-21 regional jet, which was delivered to domestic airlines in 2015, has not been able to be exported to major markets because it did not receive airworthiness certificates from either the FAA or the EASA.
China is also in talks with the EASA on a bilateral airworthiness agreement, which could be signed by the end of this year, Wang Jingling, deputy director general of airworthiness plans at the CAAC, said in April, according to the People's Daily report.
The signing of the China-US agreement also highlighted the fast development in China's civil aviation industry and technological advances in aircraft manufacturing, according to Li Yimin, a long-time industry insider.
"I think this is a very significant move for China's civil aviation industry, because it reflects the fast rise of our industry in the global market, not only in market size but also technological capability," Li told the Global Times on Tuesday.
China is the world's second-largest civil aviation market and one of the fastest-growing markets in the world, the US inter-agency trade information website export.gov said in a post on its website, pointing to China's aviation imports, expanding network of civilian airports and air fleet.
The US aviation sector exported $13.2 billion worth of goods to China in 2016, accounting for 58 percent of China's total imports in the sector, according to the post on export.gov in July.