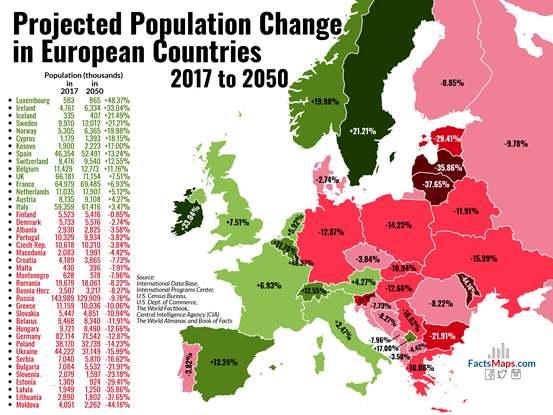 The map illustration above shows the expected population of Europe through 2050 on Janaury 22, 2017.

Warsaw (People’s Daily) – European Parliamentary leaders have different goals and interests, but if there is one thing they have in common, it is the fact that their countries don’t have enough children.

Statistics gathered from seven different sources, including the Central Intelligence Agency (CIA), was used to create a map of Europe showing foreseeable changes that will affect

European countries through 2050 regarding its population,according to a Hungarian news website.

As the map above illustrates, Western-European and Scandinavian countries can expect a slow increase in population, while Eastern regions will experience sharp declines.

But not all Western-European countries will experience population growth, such as Germany, Finland, Denmark, and Portugal.

Analysts are alarmed by what could happen in the Central and Eastern parts of Europe.

Kosovo is s the only country in the region where the population is expected to grow.

The map was created by the online map website FactsMaps.com, which uses data sources including International Database, International Programs Center and the CIA. The map shows the total population growth rate in European countries from 2017 to 2050.

There are several alarming calls in Europe over population decreases.

Germany has even gone to so far as to provide fertility subsidies, but the results have not been significant. And the poor economic situation in Greece has stagnated the country’s birth rate.

The 2017 census data released last week by the French National Institute of Statistics and Economic Studies (INSEE) revealed 767,000 babies were born in France for the year, a decrease of 17,000 from 2016.

Although the number of newborns in France has fallen three consecutive years, it still has the highest fertility rate among all European nations.

The decline of birth rate and an aging population haunt Europe’s foreseeable future.

Older Europeans’ wishes for childbirth continue to decline, new immigrants, mainly Muslims from the Middle East and North Africa, have become an important force in filling vacancies and increasing productivity. Which is also an issue that divides European society.

The report, released by the Pew Research Center last December, showed that although the Muslim population now only accounts for about 5 percent of the European population, the proportion will undoubtedly continue to increase.

In the fastest growing situation, Pew expects that by 2050, the Muslim population in Europe will exceed 75 million, or about 14 percent of the total population. Once that happens, 1 out of every 5 Germans will be Muslim.

In a more likely "mild" growth situation, by 2050, Muslims will account for 11.2 percent of Europe’s total population.