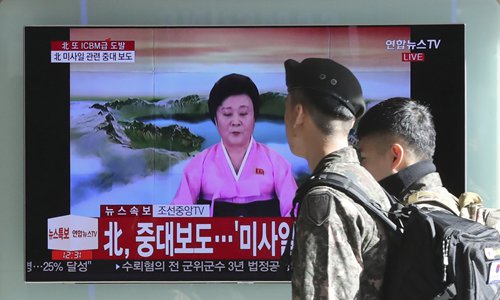 Chinese President Xi Jinping Wednesday night told US President Donald Trump on the phone that denuclearizing the Korean Peninsula is China's unswerving goal after North Korea fired a missile believed to be capable of reaching the US mainland. Xi told Trump that denuclearizing the Korean Peninsula, maintaining the international nuclear-nonproliferation regime, and preserving peace and stability in Northeast Asia are unswerving goals of China and that China is ready to join the US to push the nuclear issue toward a peaceful settlement, the Xinhua News Agency reported. He said China would like to keep up communications with the US and all other related parties, and jointly push the nuclear issue toward the direction of peaceful settlement via dialogue and negotiations.Trump said Washington highly values China's important role in solving the nuclear issue, and is willing to enhance communications and coordination with China in search for solutions to the issue, Xinhua reported. Trump later tweeted about his phone conversation with Xi, saying "additional major sanctions will be imposed on North Korea today."  Trump also spoke separately by phone with Japanese and South Korean leaders about the missile launch, said the White House.During their talks, Trump and Japanese Prime Minister Shinzo Abe reaffirmed their commitment to ending North Korea's nuclear threat, while Trump and his South Korean counterpart Moon Jae-in condemned North Korea for developing its nuclear and ballistic missile programs.The US and South Korea are trapped in their strategy of increasing pressure on North Korea with military and verbal threats, an approach that has proven useless and has served only to bring higher risks to the international community, said Chinese experts.The UN Security Council is also scheduled to hold an urgent meeting Wednesday afternoon to discuss the launch of the missile.The Chinese foreign ministry said Wednesday that it opposes any unilateral sanctions bypassing UN Security Council, or any long-arm jurisdiction. Longer-range missileNorth Korea announced that it successfully test fired the Hwasong-15 early Wednesday morning. The intercontinental ballistic missile is capable of reaching the whole of the US mainland, Korean Central News Agency (KCNA) of North Korea reported on Wednesday. North Korea fired the missile at around 2:48 am local time on Wednesday, and it flew for about 53 minutes, reaching an altitude of 4,475 kilometers, the KCNA report added."Data revealed by North Korea shows that the range of the Hwasong-15 missile could surpass 10,000 kilometers, which means it could hit anywhere on the US mainland," Song Zhongping, a Beijing-based military expert, told the Global Times on Wednesday.The Wednesday launch also marked the third ICBM test by North Korea following the test-firing of two Hwasong-14 ICBMs in July.After viewing the launch, North Korean leader Kim Jong-un declared that the country had finally realized the "great historic cause of completing the state nuclear force, the cause of building a rocket power," KCNA reported. "Completing the state nuclear force means North Korea is capable of developing and firing short-, medium- and long-range ICBMs that are capable of carrying nuclear warheads," said Song.North Korea is likely to conduct additional tests of its Hwasong-15, Hwasong-14 or Hwasong-12 missiles to finalize their design, Song further noted. "North Korea is fighting for time to complete testing of its nuclear weapons," Zhang Jiadong, a professor at Fudan University's Center for American Studies, told the Global Times Wednesday.