In May, 2014 Hao injured his back while digging wells at a construction site, turning him into a paraplegic. His ex-girlfriend left him and their son in September that year and hasn’t been heard from ever since. Bedridden for many years, Hao lost weight, dropping from 75 kilograms to 50 kilograms.

Being unable to work, Hao found that he could make a living by live-streaming online. He sings songs, does rehabilitation exercises, and talks to fellow netizens with his smartphone. Sometimes he makes short videos. 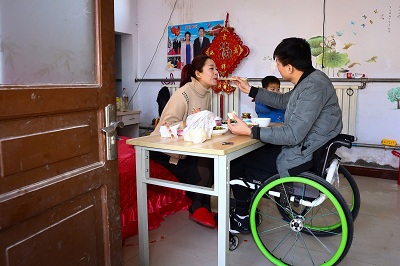 Fu Chengjun, a single mother from Anhui Province, first met Hao on the live-streaming platform in February 2017. She shared a similar experience with Hao and was deeply moved by his optimism. Several months later, Fu came to Hebei with her three-year-old son and married Hao. It’s a tradition in Hebei that a man has to prepare betrothal gifts for his future wife. However, Fu refused to take any gifts because she was aware of her future husband’s family condition. 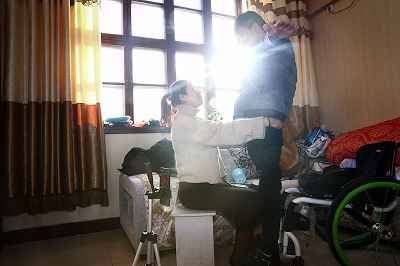 After their marriage, Fu took care of the family. Every day, she would massage Hao and help him with his rehabilitation exercises.

Hao’s tenacious and positive attitude has inspired many netizens. He has about 70,000 followers online, many of whom are disabled people. The family mainly earns through live-streaming and selling towels, underwear and disposable diapers online. 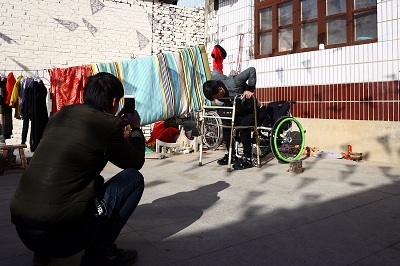 Hao’s cousin takes a video of him. (Photo: VCG)