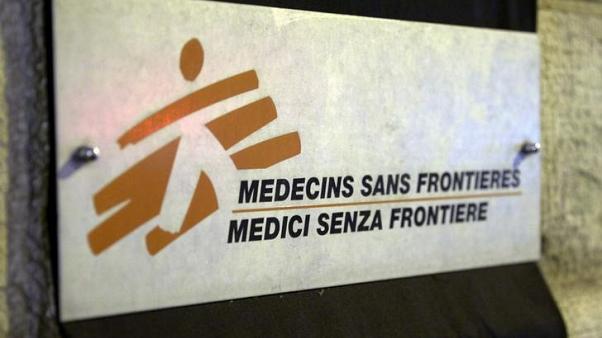 A sign is pictured over a black sheet outside the Medecins Sans Frontieres (MSF) headquarters in Geneva, Switzerland October 7, 2015. REUTERS/Denis Balibouse

International aid group Medecins Sans Frontieres (Doctors Without Borders) said on Wednesday it had dealt with 24 cases of sexual harassment or abuse among its 40,000 staff last year, and dismissed 19 people as a result.

MSF said it had released the figures to demonstrate transparency after the scandal at British charity Oxfam, whose deputy head resigned this week after The Times newspaper reported some staff working in Haiti after the 2010 earthquake paid for sex with prostitutes.

Britain’s development minister has said the government will discuss with law enforcement possible prosecutions and that funding of overseas aid agencies will be cut if they fail to draw lessons from Oxfam’s problems.

Medecins Sans Frontieres, which was founded in Paris but is headquartered in Geneva and has global affiliates, said it was receiving a rising number of reports of abuse internally.

During 2017, it said 146 complaints were received from the field. Of those, 40 involved abuse and/or harassment and were investigated internally.

“Of these 40 cases, 24 were cases of sexual harassment or abuse,” the group said in a statement.

“Two of these were situations of sexual abuse or harassment by MSF staff against non-MSF staff (patients or members of the community). In total, out of the 24 cases of sexual harassment or abuse, 19 people were dismissed.”

The statement did not provide details of where the harassment or abuse took place, who was dismissed and whether the complaints were also registered with local law enforcement.

MSF is one of the world’s largest non-governmental organizations, with local and international staff working for long periods in extreme conditions, including war zones and during natural disasters.

Oxfam, which has around 2,500 staff and 31,000 volunteers globally, receives around 32 million pounds ($44 million) of British government funding a year. The European Commission has said it could cut off its funding for Oxfam, which stands at around 68 million euros ($84 million) a year.

The scandals are escalating into a broader crisis for Britain’s aid sector by bolstering critics in the ruling Conservative Party who believe the government should reduce spending on aid in favor of domestic priorities.