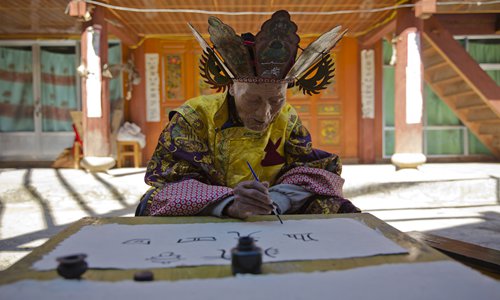 An elderly resident of Baidi village in Shangri-La, Southwest China's Yunnan Province, writes a character in the ancient Dongba language. The man is from a family surnamed Dongba, which still maintains the tradition of writing and divining in the Dongba language. Photo: IC 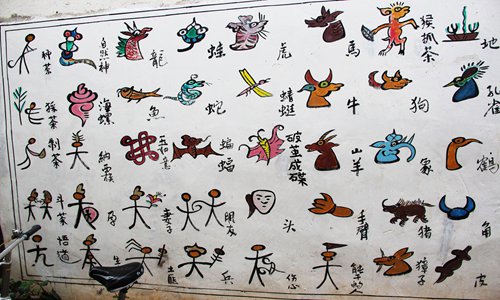 China's National Museum received a donation of 150 rolls of Dongba manuscript from the Naxi ethnic groups living in Lijiang, Southwest China's Yunnan Province on Thursday. Dongba characters are the world's only living pictographic glyphs, according to The Beijing Times. In August 2013, ancient Dongba literature was submitted by China and listed in the Memory of the World Register, a program endorsed by the Director-General of UNESCO, after it was deemed to meet the criteria of having world significance and outstanding universal value.At the donation ceremony, Lü Zhangshen, the curator of the National Museum, told reporters that the Dongba works will be essential for the study of the ancient Naxis and other southwestern Chinese minority groups. Moreover, a large proportion of the works are passed down orally, so their preservation in written form will go a long way to ensuring they are not lost to history.Minority languages have faced a growing challenge from globalization. There are seven Chinese minority languages that are spoken by fewer than 100 people, and another 15 minority languages spoken by fewer than 1,000 people in the country. Languages such as Nanai, spoken by the Hezhen minority, are on the verge of extinction, with only a handful of elderly people using them, according to data provided by Sun Hongkai, a Tibetan languages scholar at the Chinese Academy of Social Sciences (CASS). Danger of extinction China has 130 languages, 10 major dialects of Mandarin and countless minor vernaculars, according to government statistics. However, according to Sun, most of them are in imminent danger of going extinct. Sun has been conducting field surveys on endangered Chinese minority languages for more than 60 years. Since 1960, Sun has visited the Bingzhongluo and Pengda villages in Gongshan county, Yunnan Province, to study the "Alongs", a branch of the Nu minority. There were about 400 people who spoke the Along language when he first visited in 1960, but the number has now shrunk to 100."The young do not speak the language anymore," Sun said. At least 10 other minority languages in the Chinese mainland are in a similar situation, Sun said, citing the Nanai language as an example. Liu Lei, a teacher at the Jinkou Hezhen village primary school of Tongjiang, Heilongjiang, echoed Sun's view. "Previous survey results show that only a handful of elderly people have a mastery of the Nanai language," Liu said.This situation is closely related to the tiny population of the minority group, said Liu. According to data from the 2010 national census, the Hezhen population was only 5,354. "Not only is the population small, they are mostly married to people from the Han nationality, and as they speak more Mandarin, they [Hezhen people] speak less Nanai," Liu said. According to Li Songmei, a Hani writer, "The cities have had a huge impact on the young. Because they work in the cities and even bring their children with them, they stop using the Hani language. They find it to be 'out of style'. Even when I greet them in Hani, they reply in Mandarin."The mass media is another factor behind the change. "It is easier to hold on to your mother tongue when the minority community is sealed off. But as radio, TV, and the Internet are so dominant, it is natural for them to learn Mandarin," Sun said. Call to action There have been calls for measures to be taken at government level and among the public to save the endangered languages. Liu has been regularly organizing ethnic dancing sessions for local residents, and Li Songmei together with her colleague Wang Feng have established language study groups on online social platforms including WeChat and QQ. Yunnan Province has also issued a directive to protect minority languages spoken by 14 ethnic groups living there. Wang Feng hailed the move, saying that work to preserve languages now has a legal basis. "Since most young people have learnt English and pinyin, it's easier to teach them the Bai minority language. We've also created bilingual emoji stickers," Wang added.Yunnan Minzu University started recruiting Hani language major students in 2012 in a bid to protect the language. In 2015, China's Ministry of Education launched a national language resource protection project. By 2016, the project had been extended to cover 81 minority languages, including endangered ones, 53 Chinese dialects and 32 language cultural survey spots, said the report.