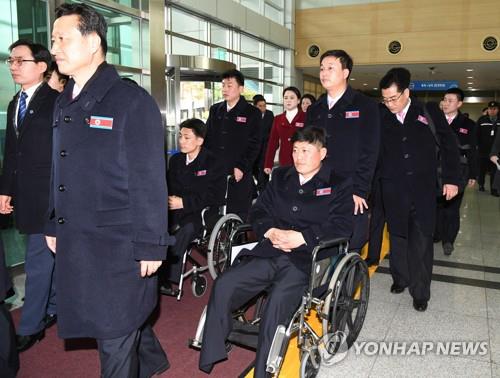 A group of athletes from the Democratic People's Republic of Korea (DPRK) crossed the inter-Korean land border to South Korea Wednesday to participate in the Winter Paralympics scheduled for March 9-18, according to Seoul's unification ministry.

The 24-member DPRK delegation, including six athletes and four members of the Paralympic Committee, crossed the border via the western land route and went through the entry procedure in the inter-Korean transit office.

The athletic delegation moved by bus to PyeongChang, the venue for the Paralympics located in east of the capital Seoul.

Among the six DPRK athletes, two will compete in the cross-country skiing event. The four others will observe other competitions as potential athletes.

The 20-member athletic delegation was led by Jong Hyon, a vice chairman of the central committee of the Korean Federation of the Protection of the Disabled (KFPD).

The four-member delegation of the Paralympic Committee of the DPRK was headed by Kim Mun-chol, chairman of the KFPD.

The DPRK delegations planned to return home around March 15 before the Paralympic closing ceremony, according to Seoul's unification ministry.