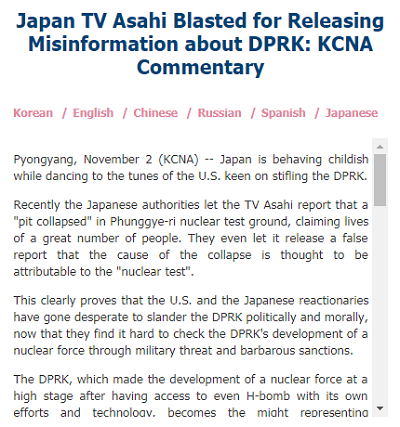 Screenshot of the KCNA commentary

The Democratic People's Republic of Korea (DPRK) on November 2 denounced a "false report" by Japanese TV Asahi, which said a pit collapse in DPRK's nuclear test ground had led to many deaths.

Japanese authorities are responsible for allowing TV Asahi to release "the false report," DPRK's official media KCNA noted in a commentary, saying Japan is“behaving childish while dancing to the tunes of the US keen on stifling the DPRK.”

Japanese TV Asahi reported on October 31 that a tunnel under construction at a DPRK nuclear test site collapsed and as many as 200 workers could have been killed.

It also said that Japanese authorities were seeking a pretext for sending troops to the Korean Peninsula.