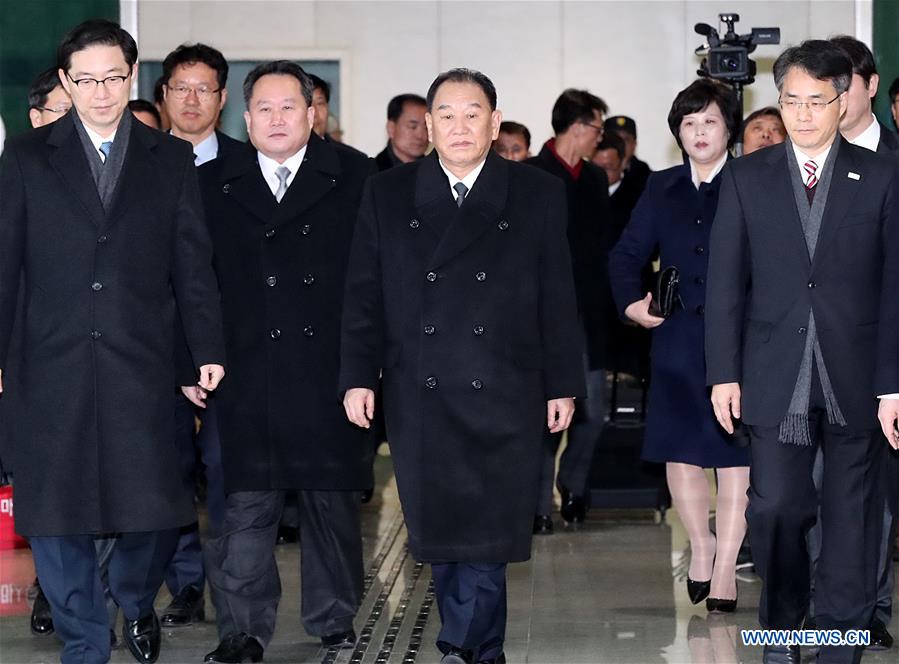 A high-ranking delegation led by Kim Yong Chol(C), vice chairman of the Central Committee of the ruling Workers' Party of Korea, arrives at the inter-Korean transit office in Paju, South Korea, on Feb. 25, 2018. The high-ranking delegation from the Democratic People's Republic of Korea (DPRK) arrived in South Korea Sunday to attend the closing ceremony of the 23rd Winter Olympics. (Xinhua/Newsis)

Chung Eui-yong, head of the National Security Office of the Blue House, lunched at a hotel here with Kim Yong Chol, a vice chairman of the Central Committee of the ruling Workers' Party of Korea from the DPRK side.

Also attending the closed-door meeting was Ri Son Gwon, chairman of the Committee for the Peaceful Reunification of the Fatherland of the DPRK.

From the South Korean side, Vice Unification Minister Chun Hae-sung and Lee Do-hoon, special representative for the Korean Peninsula peace and security affairs at the foreign ministry, participated in the lunch meeting.

Lee represents South Korea at the long-stalled six-party talks to denuclearize the Korean Peninsula, which involved South Korea, the DPRK, China, the United States, Russia and Japan. The six-way dialogue has been halted since late 2008.

The lunch meeting was a follow-up step to the closed-door meeting Sunday in PyeongChang, east of Seoul, between President Moon and the high-ranking DPRK delegation.

The DPRK delegation told Moon that Pyongyang had enough willingness to hold talks with Washington.

Moon has held to a position that dialogue between the DPRK and the United States should be held to fundamentally resolve the Korean Peninsula issues.