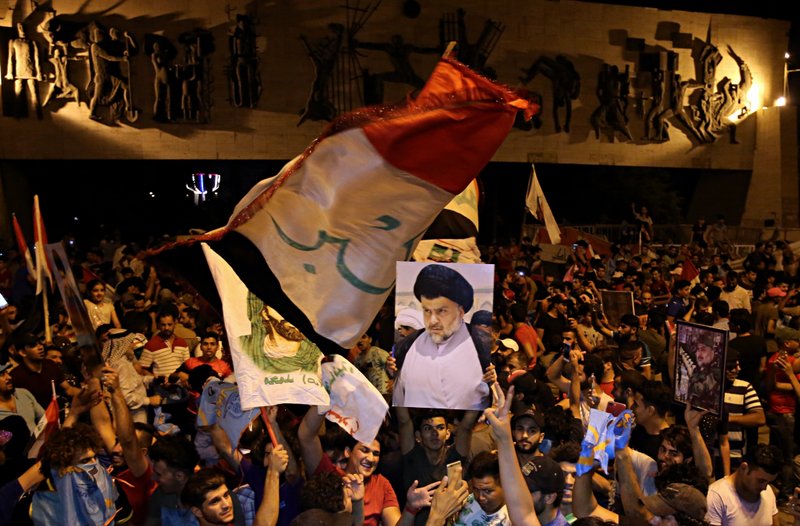 A populist coalition organized by influential Shiite cleric Muqtada al-Sadr emerged as the early front-runner Monday with half the vote counted in Iraq’s national election.

Partial returns from Saturday’s balloting — the first since Iraq declared victory over the Islamic State militant group — were announced by the country’s electoral commission and put al-Sadr’s political alliance in the lead in four provinces, including Baghdad.

Remembered for leading an insurgency against U.S. forces and inciting sectarian bloodshed against the Sunni population, al-Sadr has in recent years sought to recast himself as a populist, railing against corruption and failing services and striking a political alliance with Iraq’s secularists and Communist Party.

None of the competing blocs appear on track to win a majority in parliament and name a prime minister. As the results stand, al-Sadr’s bloc will be able to take a leading role in the political horse-trading to find a compromise candidate. Because al-Sadr did not run for a seat, he cannot become prime minister, but his deputies in parliament are expected to follow his directives.

Al-Sadr commands the devotion of millions of Iraqis who have sent their sons and husbands to fight for his militia from the early days of the U.S. occupation.

“We are joyous,” said Jaafar Abdeljaleed, 28, who added that his father was killed fighting U.S.-led forces in 2003. “Sayyid Muqtada loves the nation, and so do I.”

The election came as Iraq is struggling to bring down soaring unemployment and reintegrate its disenfranchised Sunni minority. More than 2 million people are displaced by war, most of them Sunnis.

Also at issue is how to integrate the country’s vast and predominantly Shiite militia structure into the security forces. The militias, known collectively as the Hashd Shaabi, are key conduit of influence for Iran into Iraq and Syria, where Tehran has sent many of them to fight.

An electoral alliance of Hashd-linked candidates, headed by militia commander Hadi al-Amiri, is currently in second place in the election returns.

Al-Amiri maintains close ties to Iran. He also has said he is open to U.S. training of Iraq’s military and regularly meets with U.S. diplomats in Baghdad.

Al-Sadr commands his own militia that fought against IS militants, but he has disavowed any Iranian and U.S. influence in Iraq, and he has called for the full withdrawal of U.S. troops. His former Mahdi Army fought American forces for years. In 2014, he reorganized his fighters under the name the Peace Brigades — Saraya Salam.

So far, Prime Minister Haider al-Abadi is performing poorly in early returns, coming in third and fourth places in most provinces, and fifth in Baghdad.

In a national address Monday, al-Abadi vowed to keep the country safe under his command until a new government is formed.

“I call on Iraqis to respect the results of the elections,” he said.

The electoral commission released results from 10 of 19 provinces Sunday night, including tallies from Baghdad and Basra provinces. The commission gave no indication on when more returns would be announced.

Members of the election commission read out vote tallies for each candidate list in 10 provinces on national TV. By the end of the announcement, al-Sadr’s list had the highest popular vote, followed by al-Amiri’s.

Seats in parliament will be allocated proportionally to coalitions once all votes are counted.

Celebrations erupted in Baghdad’s Sadr City, an impoverished quarter that is home to about 3 million people and is named after the cleric’s father, Ayatollah Mohammed Sadeq al-Sadr, who was killed by suspected agents of Saddam Hussein in 1999.

Only 44 percent of voters turned out — the lowest in the four elections held since Saddam’s ouster in 2003. Despite that, al-Sadr’s sophisticated political machine mobilized his loyal base of followers to go to the polls.

Any political party or alliance must gain a majority of the 329 seats in parliament to be able to choose a prime minister and form a government. Dozens of alliances ran for office, and months of negotiations are expected before any one alliance can pull together the 165 required seats.

The constitution sets a quota for female representation, stating that no less than one-fourth of parliament members must be women. Nearly 2,600 women ran for office this year.