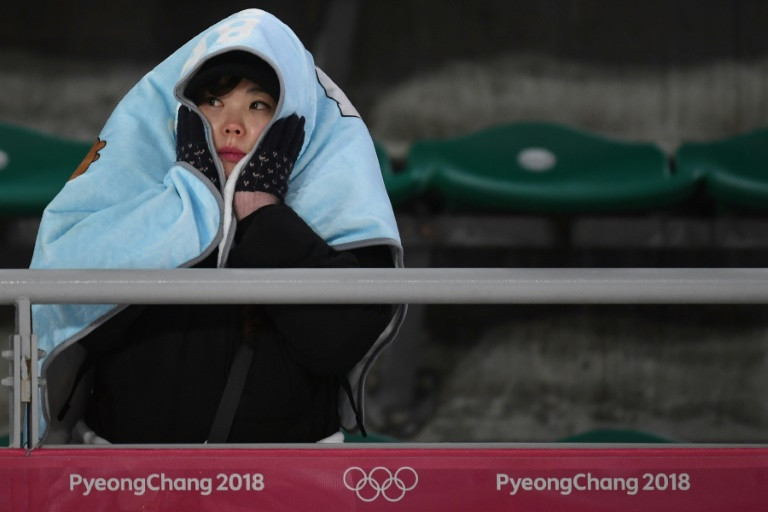 Spectators have been urged to wrap up warm with temperatures set to plunge on Monday. Photo: AFP/Christof Stache

An earthquake triggered an alert and high winds disrupted competition at the Pyeongchang Winter Olympics Sunday, as officials warned of a severe freeze and urged fans to wrap up warm.

Early on Sunday, ski officials were forced to postpone the showpiece men's downhill until Thursday as buffeting winds made the high-speed slope too dangerous for competition.

Later, the women's slopestyle snowboarding also fell victim to the wind, as the qualifying session was scrapped with riders going straight into the final on Monday.

It comes after the first ski jumping final finished more than an hour behind schedule, past midnight on Saturday, as competitors were held up by swirling winds.

As if to complete the set of extreme conditions, an alert warning of a high risk of fire -- given the dry, windy weather -- also flashed up on mobile phones on Sunday.

Organisers gave assurances that the Games were at no risk from earthquakes, with venues built to withstand even strong tremors. Sunday's quake was measured at magnitude-4.7 by the US Geological Survey and was about 260 kilometres (160 miles) away.

"All the facilities in the Games area are built so they can withstand strong earthquakes over 7.0... so I assure you there was no issue regarding these facilities," said Sung Baik-you, spokesman for the Games organisers.

Of more concern for the sparse crowds at the outdoor events will be the biting cold, which has already made Pyeongchang one of the chilliest Olympics on record -- and which is set to dramatically worsen.

Temperatures are forecast to plunge to -14 degrees Celsius (6.8 Fahrenheit) on Monday, will feel like a shivering -25C in the strong, mountainside wind.

"People are advised to dress warmly and wear hats and gloves to keep themselves warm," warned Sung. 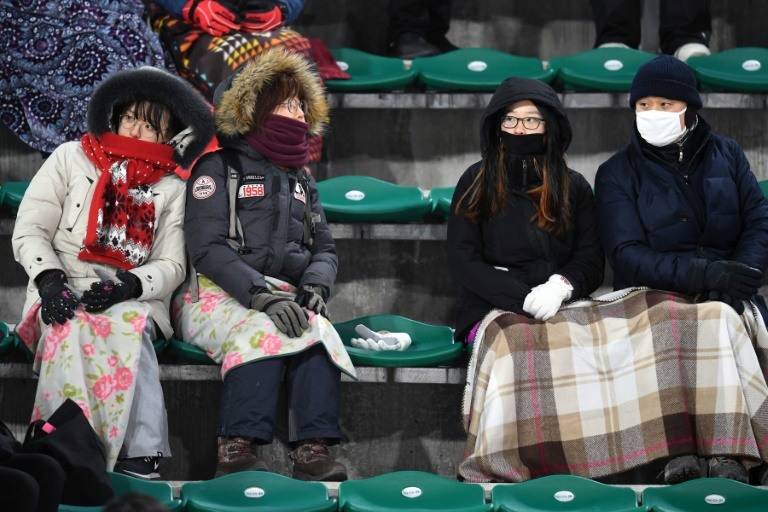 Life has been tough for competitors in the cold, windy conditions -- and also for spectators. Photo: AFP/Christof Stache

The wind has made life tough so far for competitors, with several athletes complaining of difficult conditions.

"The conditions were pretty crazy today just because of the wind," said Canada's Max Parrot, after finishing second in the men's slopestyle snowboarding on Sunday.

The men's ski jumping was particularly unpleasant, as the athletes had to contend with freezing cold at the top of the hill as well as their nerves as the delayed competition dragged on.

"It was cold as ice up there," said Austria's Michael Hayboeck, who finished 17th, while Poland's Dawid Kubacki said the wind made the competition "a lottery".

"It was really bad for me, what I can do?" he asked. "It's something I have no influence on. I need to jump in the conditions when they let me go."

However, the International Olympic Committee (IOC) said the ski jumpers were never in danger.

"Athlete safety is our number one concern," said spokesman Mark Adams. "All these venues are organised in very close contact with the federations.

"We're very, very confident the federations and athletes know what they can and can’t do."