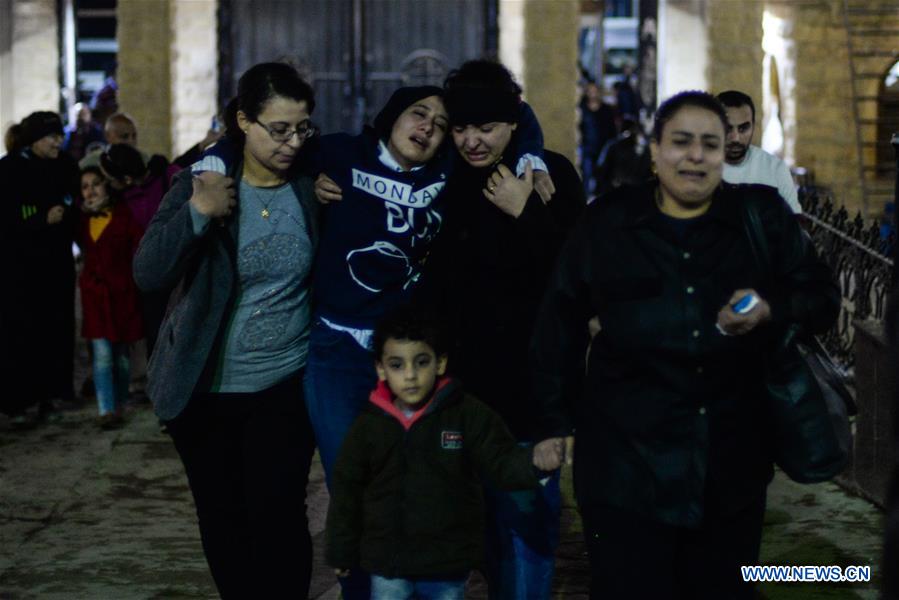 Egyptian President Abdel-Fattah al-Sisi mourned on Friday the victims of a terror attack that targeted Christian believers outside a church in Cairo.Such terrorist attacks will not weaken the determination of the Egyptian people to purge Egypt of terrorism, Sisi said in a statement released by the Egyptian presidency.The Egyptian president thanked the security men guarding the church for their heroic role in foiling the terrorist attack, ordering all state bodies to provide all possible support for the families of the victims and the injured alike.

At least ten people were killed in a shootout outside Mar Mina church in Cairo district of Helwan on Friday.

Egyptian Health Ministry said the ten killed include one attacker and one policeman, who are Muslims, and eight Copts.

The ministry added that at least five others were wounded, with two of them being in serious conditions.

The attack came in the run-up to Orthodox Christmas celebrations next week.

No group has yet claimed responsibility for the attack. However, Fingers are pointed at a Sinai-based group loyal to Islamic State (IS) group, which has killed dozens of Christians, who make up about 10 percent of the country's 93 million population, across the country over the past few years.

Eyewitnesses told Xinhua that the two masked militants on a motorcycle have entered the street leading to the western side of the church, and then they got off the ride and targeted the security post outside the church.

They added the exchange of fire took around 20 minutes.

Egyptian Interior Ministry said the attack was carried out by terrorists, affirming that one was killed and the other one was arrested.

Bombs-disposal team has defused two bombs planted nearby the church, according to the ministry.

The terrorist attack has drawn regional and international condemnation.

On its twitter, the U.S. embassy in Cairo condemned the terrorist attack on Mar Mina church, saying the U.S. stands steadfastly with the people of Egypt in the face of such cowardly attacks.

"The U.S. Embassy strongly condemns today's terrorist attack on a church. We offer condolences to the families of the victims and wishes for speedy recovery for those wounded," it added.

French Ambassador in Cairo Stephane Roumtier said that Paris stands by Egypt in the face of terrorism.

Posting on his Twitter account, the French diplomat expressed his country's solidarity with the families of the victims.

Meanwhile, Secretary-General of the Organization of Islamic Cooperation (OIC) Yousef bin Ahmad al-Othaimeen expressed his sincere condolences to the families of the victims, wishing a speedy recovery for the wounded.

Othaimeen stressed OIC's solidarity with Egypt in its fight against terrorism which targets the country's security and stability.

He underlined OIC's support to measures to be taken by Egypt to fight terrorism, praising the vigilance of the security forces and the way they dealt with the terrorist attack.

In a statement, the AL chief called for unifying Arab and international efforts to fight terrorism at all levels.

Saudi Arabia, United Arab Emirates, Kuwait and Bahrain have also condemned the terror attack, expressing their full support for Egypt in its war against terrorism.

In the meantime, the Orthodox Church announced that the funeral possession for the eight Coptic Christians who were killed in the attack will be held Friday in St. Mary Church in Cairo.

They will be laid to rest in the cemeteries of Anba Barsoum's monastery in Helwan district, the statement added.

Terrorist attacks have been growing in Egypt since the military removal of former Islamist President Mohamed Morsi in July 2013, with an IS affiliated group claiming responsibility for most of the attacks.