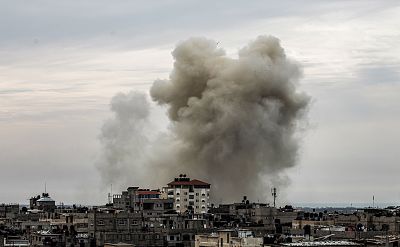 The Egyptian forces have killed 16 extremely dangerous militants since Wednesday as part of the ongoing Operation Sinai 2018, the army said in a statement on Sunday.

"Three leaders of terrorists were arrested in mountainous areas in Central Sinai, based on intelligence provided by the honorable citizens of Sinai," said Tamer al-Refaay, the military spokesman.

A non-commissioned officer and a private soldier from the army were killed and other six army men were wounded in the fire exchange, al-Refaay added.

The statement added the air forces' raids have destroyed nine targets used by terrorists including a hideout, a water tanker and three booby-trapped 4x4 vehicles.

More than 120 militants and terrorists have been killed since the country's anti-terror military operation began on Feb. 9.

The operation, dubbed "Sinai 2018," comes weeks before Egypt starts its 2018 presidential elections scheduled for late March, where incumbent President Abdel-Fattah al-Sisi is expected to make an easy win for a second term.

The operation was launched as part of the efforts to reach the three-month deadline set by President Sisi to eliminate terrorism after the mosque attack that killed 310 people in the northern Sinai city of Arish in November, 2017.

Egypt's army has been struggling to uproot the strongholds of militants, now belonging to the Islamic State branch in Sinai, since the ouster of the Islamist leader Mohamed Morsi, in response to mass protests against his rule in 2013.