Elderly Chinese couple in US land in hospital after flight diverted 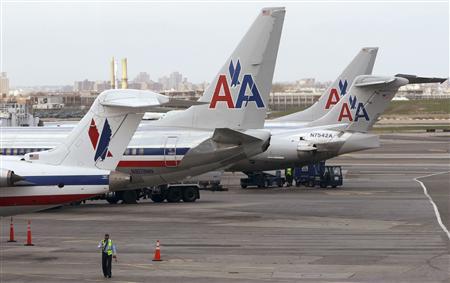 Los Angeles (People's Daily) -- An elderly Chinese couple was critically injured last week while traveling to LaGuardia Airport in what was supposed to be a routine airplane trip that turned into a nightmare.

The horror began when their American Airlines flight was diverted to Baltimore International Airport, from its original destination in New York, due to the intense snowfall that slammed the US East Coast.

Upon arrival in early afternoon, passengers were instructed to get on a bus without being offered any alternatives or assistance such as food or water, one witness who wish to remain anonymous said.

For the elderly Chinese couple who didn’t speak any English, they found their only source of comfort in befriending the bilingual witness who also spoke Mandarin.

“They didn’t even know where they were,” the witness said.

During the bus ride, the driver made stops on the side of the highway to let the travelers pee. They also had to limit their water intake to avoid frequent bathroom stops, the witness recalled.

As day turn into night, the bus was stuck some 30 miles out on the interstate where an earlier accident put traffic in complete halt. Soon, adding to their frustration, the exhausted travelers learned that the bus was heading back to Baltimore, where it all started.

“People were calling AA (American Airlines), the only person I know who got to AA was a woman on the bus who was an Executive Platinum member,” the witness said.

Right before midnight, the driver stopped in Aberdeen, Maryland to let everyone take a break. As the passengers got out, the Chinese couple followed the witness and others into a crowded McDonald’s. After deciding the lines were too long, the plan was for the witness to get food from a nearby convenience store while they wait at the bus.

As the witness got back to the bus, the couple was nowhere to be found.

Soon, the sharp sound of siren tore through the cold, windy night as police and ambulance start to arrive for a car accident that had just taken place across the street.

As the bus was about to leave, the witness told the driver that two people were missing and could possibly be involved in the accident. After getting the permission to go check, she confirmed with an on-scene police officer that the victims were indeed, two elderly Chinese couple who had suffered severe head trauma after getting hit by a truck.

On her way back, the witness tried to contact and inform American Airlines that two of their passengers had suffered severe injuries. The automated phone service was the furthest she could get for help.

It fell on her to get a hold of the couple, who were only strangers hours earlier.

After getting back to the airport, she broke the news to the airline staff and was ushered into a backroom. The airline explained that they had sent help along with an interpreter to aid in the couple’s medical process.

That, as she found out after arriving at the hospital, was false.

American Airlines had issued an apology to the witness and offered a travel voucher worth $700.

“I understand the weather is out of their control,” the witness said, “but the rest of it is.

Responding to Global Times request for comment, American Airlines said that "Our CARE Team is still working with the family and our number one priority is making sure that they have the support and care they need at a difficult time."

“Airlines in recent years have done a better job of just not operating flights when there is the risk of that (severe weather condition), in this case, obviously in retrospect, American made a bad decision to operate the flight,” said Managing Partner of Airline Weekly Seth Kaplan.