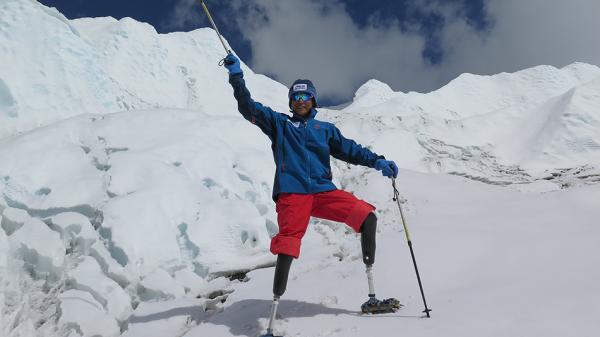 Beijing (People's Daily) - Xia Boyu, a 69-year-old double leg amputee and Chinese climber, has overcome many obstacles in his life including despair, disabilities, and a cancer diagnosis. Yet with all these worries, he still managed to accomplish his dream of successfully climbing the world’s highest mountain on Monday.

This is Xia’s fifth attempt to climb the 8,844.43-meter-high Mount Qomolangma, also known as Mount Everest, and his story is just as long and harrowing as the mountain itself.

Xia’s worries started early in his climbing career when lost his feet during his first attempt to scale the mountain in 1975. He developed frostbite after he lent his sleeping bag to a person on his Chinese Mountaineering Team who had lost their equipment during the climb. Xia subsequently had both of his feet amputated.

Xia found some solace when he learned that he could use artificial feet to help him walk again and he eventually found himself preparing to once again attempt to scale the mountain. However, disaster struck again when he learned that he had contracted lymphoma, a type of cancer, and that doctors would need to amputate both his legs below his knees.

In 2014, 65-year-old Xia came to the foot of Mount Qomolangma for a second time. When he arrived at the base camp, several snowstorms and avalanches in central Nepal resulted in one of the worst disasters the country has ever experienced. The Nepalese government cancelled all the climbing plans for that year.

In 2015, Xia set off to conquer the mountain again, however, an 8.1-maganitute earthquake and a subsequent avalanche crushed his dream again.

Xia reunited with his former mountaineering teammates at CCTV’s Challenge the Impossible in 2015. During the interview, he said he could still remember the pain and pity he felt when he was stuck in bed and heard the news that his teammates had climbed to the mountain’s summit.

Xia said he would climb the mountain in 2016 in order to “not to leave any regret in his life.”

“It’s the goal I’ve been fighting for and I will never give up!” Xia said.

In 2016, Xia’s fourth attempt was the closest he had come to reaching the summit at the time. However, a sudden snowstorm stopped him just 94 meters shy of his goal. He said the decision to abandon the trek was difficult, but that he had to consider the safety of his five young guides.

Xia’s team arrived at the base camp of Mount Qomolangma on April 12. Yu Hong, Chinese ambassador to Nepal, met with Xia to wish him luck on his climb. Xia’s son, Xia Dengping, also secretly went to the base camp on May 4 to support his father.

Xia departed from the base camp at 3 a.m. (local time) on May 8. Even though many obstacles like extreme weather conditions stood in his way, Xia finally reached the summit of Mount Qomolangma on May 14.