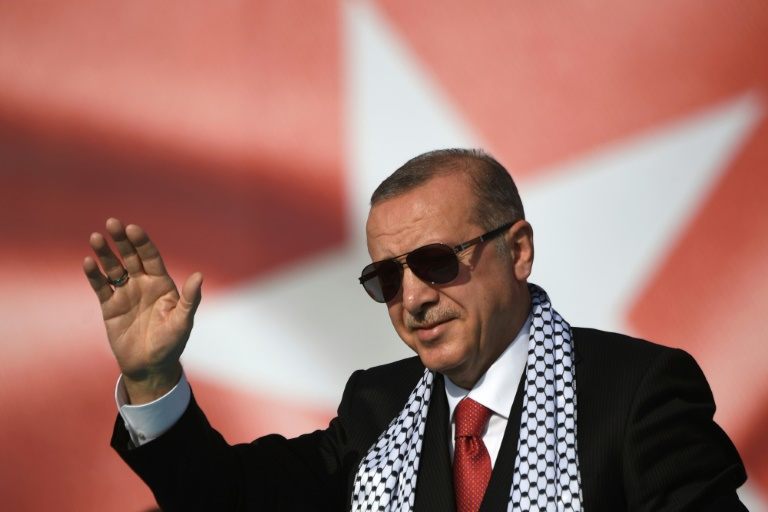 Erdogan has previously drawn controversy for electioneering in Europe, where there are some three million Turks eligible to vote in Turkish elections, including 1.4 million in Germany (Photo: AFP)

Turkish President Recep Tayyip Erdogan will hold an election rally in Sarajevo Sunday for expatriate Turks, an event that has stirred controversy in Bosnia.

Sarajevo was chosen for the rally after several European Union countries, including Germany, banned such rallies in the campaign for last year's referendum on a new system enhancing the powers of the Turkish presidency.

The decision sparked tension between Ankara and Brussels.

Turkey heads to presidential and parliamentary polls on June 24.

Erdogan has previously drawn controversy for electioneering in Europe, where there are some three million Turks eligible to vote in Turkish elections, including 1.4 million in Germany.

According to Bosnian media, around 20,000 people are expected for the rally in Sarajevo's largest sports venue Zetra.

Two giant portraits of Erdogan and Turkey's first president Mustafa Kemal Ataturk, were placed in the hall on Saturday.

In April, Austria and the Netherlands also said they would ban any campaigning by Turkish politicians on their soil for the June elections.

A similar ban was seen as unlikely in Sarajevo, however, given that Bosnian Muslim leader Bakir Izetbegovic attended the marriage of Erdogan's daughter in 2016.

His SDA party is seen as close to Erdogan's ruling Justice and Development Party (AKP) which, according to Bosnian media, is planning to open a representative office in Bosnia soon.

"We will show that he (Erdogan) has friends and that there are those who are proud of him," Izetbegovic, the Muslim member of Bosnia's tripartite presidency, told his supporters last week.

The Turkish leader "is not liked in the West and there are many frustrated Bosniak (Muslims) who do not like him in this country", Izetbegovic said.

"What is the problem? The problem is that he is a powerful Muslim leader that we have not had for a long time."

A Facebook group supporting Erdogan's arrival voiced "welcome to the protector of Muslims in the world".

But the support is not unanimous.

Another Facebook group of Sarajevans called on citizens of Bosnia to raise their voices "against the meeting ... and say no to Turkish foreign policy and its interference in Bosnia's politics".

Erdogan's visit is seen by many as an expression of "neo-Ottomanism".

The Balkans, notably Bosnia, were ruled by the Ottomans for more than four centuries until 1878.

Dino Mustafic, a prominent theatre director, on Twitter ironically labelled Saturday's event an "emotional and romantic rally from colonial times" during which "poor local people will applaud their sultan with euphoria".

Turkey has excellent relations with Bosnia and Turkish companies have played a major role in the country's reconstruction following its 1990s inter-ethnic war.

But Salko Sokolovic, a former party member who broke ranks with the SDA, warned of a possible negative reaction from Germany, which is Bosnia's much stronger commercial partner, and has rather tense relations with Erdogan.

"If you push a finger in the eye with such a rally to a friend like this (Germany) there will certainly be consequences," Sokolovic said.

Erdogan has called snap presidential and parliamentary elections for June 24, bringing the polls forward by a year-and a half.

Half of Bosnia's 3.5 million citizens are Muslims, a third are Serbs, while Croats make some 15 percent of the population.

His supporters are expected to arrive from the whole Europe -- Germany, Austria, Belgium, Scandinavia, the Netherlands Switzerland, Italy or Hungary.

The expatriate European vote is generally a source of support the AKP and officials are keen to rouse a strong turnout in Europe.

The early election in Turkey is set to accelerate its transition to the new presidential system with full executive powers which critics fear will lead to a one-man rule.