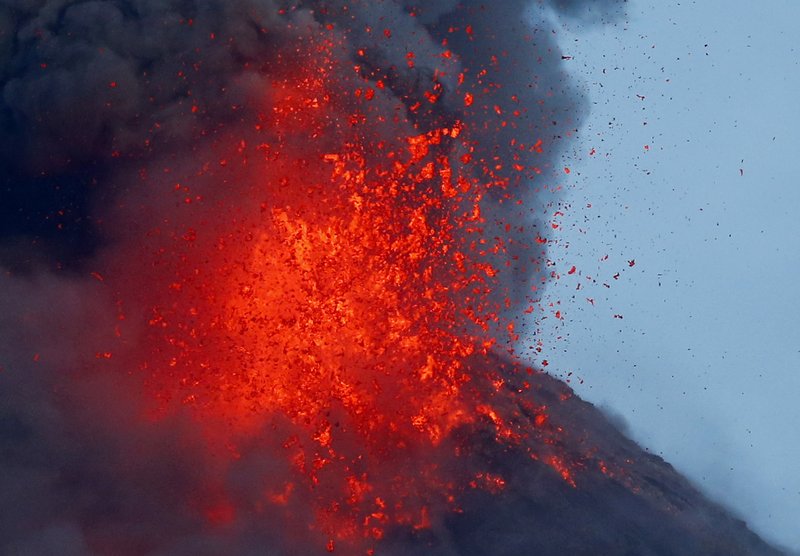 A volcano that’s been erupting for almost two weeks in the Philippines still appears to be swelling with magma under the surface, scientists said Thursday.

More than 74,000 people are staying in dozens of emergency shelters as Mount Mayon continues to belch lava, ash and superheated gas and rocks. Officials are worried the eruption may last months, affecting the education, health and livelihoods of people in its shadow.

The Philippine Institute of Volcanology and Seismology said tremors, pyroclastic flows and emissions of sulfur dioxide were detected Wednesday and early Thursday.

Lava erupting up to 500 meters (1,640 feet) high was spilling down the slope, with one lava flow extending 3 kilometers (1.8 miles) from the crater. Ash plumes still rising up to 5 kilometers (3 miles) high have spread ash onto farms and towns nearby, darkening the skies and forcing villagers to wear masks.

The institute said GPS and other measurements indicated a sustained swelling or inflation of the mountain surface, which was consistent with magma rising and creating pressure.

The alert level for Mayon remains four on a scale of five, indicating a violent eruption may be imminent.

There have been no reports of injuries, but law enforcers have struggled to keep villagers and tourists from sneaking into the danger zone, which extends 8 kilometers from the crater.

Although Mayon, in northeastern Albay province, has erupted about 50 times in the last 500 years, it has remained popular among climbers and tourists.

In 2013, an ash eruption killed five climbers who had ventured near the summit despite warnings.

The Philippines has about 22 active volcanoes. The explosion of Mount Pinatubo in 1991 was one of the biggest volcanic eruptions of the 20th century, killing hundreds.