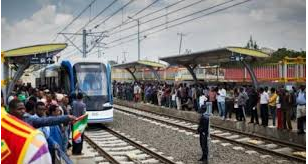 Ethiopia on Wednesday commended the first two months of transportation operation of the Chinese-built electrified railway.

The Ethiopia-Djibouti railway that connects landlocked Ethiopia to its neighboring Red Sea nation of Djibouti has transported over 2,000 containers of commodities from the port to central Ethiopia during its first two months of operations, the Ethiopia-Djibouti Standard Gauge Rail Transport share-company revealed on Wednesday.The railway, currently transporting commodities from the Djibouti port to Ethiopia's Modjo dry port, located some 76 km from Ethiopia's capital Addis Ababa, is said to help propel Ethiopia's logistics and fright service delivery.According to Tilahun Kassa, Director of the Ethiopia-Djibouti Standard Gauge Rail Transport company, the linkage between the Djibouti port and Ethiopia's Modjo dry port has shown early achievements as it is expected to further expand Ethiopia's international export business and trading.The Chinese-built 756-km electrified rail project, which officially commenced its commercial operations earlier this year, has the capacity of transporting 106 containers in a single route, it was noted.The railway, by reducing the journey time from port to Addis Ababa to less than 12 hours from the previous three days, has also eased challenges related to congestion of imported materials at Ethiopia's long-serving Djibouti port, according to Kassa.The two countries have repeatedly pronounced the railway as a new imputes for boosting the economic integration between the two Horn of African countries amid an increasing demand from Ethiopia's import-export activities.Contracted by two Chinese companies, the first 320 km of the rail project was carried out by China Rail Engineering Corporation (CREC), while the remaining 436 km connecting to the Djibouti port was built by the China Civil Engineering Construction Corporation (CCECC).The railway project, with an investment of 4 billion U.S. dollars, provides both passenger and freight services between Addis Ababa and Djibouti.