HEADLINE EU complains of Trump's 'gun to our head' over tariffs

EU complains of Trump's 'gun to our head' over tariffs 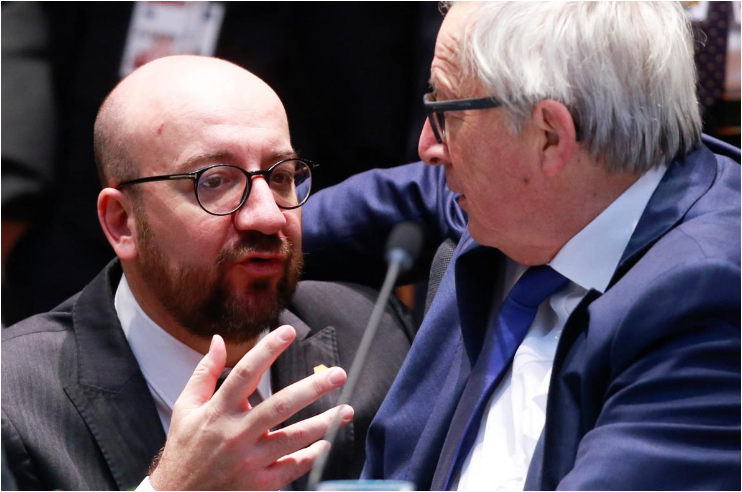 European Union leaders called on U.S. President Donald Trump on Friday to make permanent an EU exemption from U.S. metal import duties, saying they reserved the right to respond “in a proportionate manner” to protect the bloc’s interests.

The 40-day reprieve granted by Washington was like U.S. President Donald Trump pointing a gun at Europe, French President Emmanuel Macron said at a summit in Brussels.

The EU’s trade chief demanded that the United States drop “artificial deadlines” and her boss, European Commission President Jean-Claude Juncker, said it was impossible to reach agreement by May 1.

Trump said on Thursday he would suspend tariffs for the EU, the United States’ biggest trading partner, as well as Argentina, Australia, Brazil, Canada, Mexico and South Korea. The tariffs are suspended until May 1 as discussions continue.

EU heads of state and government said in a joint statement that the measures were regrettable, could not be justified on national security grounds which was the basis cited by Washington and the exemption should be permanent.

“Sector-wide protection in the U.S. is an inappropriate remedy for the real problems of overcapacity,” they said.

The leaders also said they supported steps taken by the European Commission to respond to the U.S. measures “as appropriate and in a proportionate manner”.

Cecilia Malmstrom, the trade commissioner who negotiates on behalf of the 28 nations, said Europeans did not want to be penalised by actions prompted largely by accusations of Chinese dumping and said Washington and Brussels should be cooperating.

She told Reuters it was still unclear what Trump wanted in return for granting a permanent waiver and said the EU could bring up a list of its own “trade irritants” if he insisted that EU car import duties be cut.

Allies should not be subject to “artificial deadlines”, she said.

German industry, aware that Trump has warned he could raise duties on EU cars, welcomed the reprieve but said the threat of a trade war had not disappeared.

“We still have the threat of escalating global trade conflict. And U.S. President Donald Trump will demand a price for the tariff exclusion,” Thilo Brodtman, head of Germany’s VDMA engineering federation said in a statement.

German Chancellor Angela Merkel said Europe was trying to avoid a trade war in which everyone would lose.

European steelmakers group Eurofer said the danger to the EU market had not disappeared, with the exemption only temporary, and the EU needed its own quotas or tariffs to stop steel otherwise bound for the United States from flooding into Europe.

Europe says it wants to avert a trade war but the European Commission has proposed a series of measures if the White House hits EU producers.

It would launch a challenge at the World Trade Organization, consider measures to prevent a surge of metal imports into Europe and impose import duties on U.S. products to “rebalance” EU-U.S. trade. Malmstrom said the EU was keeping its options open.

The counter-measures would include EU tariffs on U.S. orange juice, tobacco, bourbon and Harley-Davidson Inc  motorbikes.

“I have the impression that the U.S. leader wants to negotiate with the European Union by putting a gun to our head,” Michel said, in an expression that was later echoed by Macron.

“That’s a strange way to negotiate with an ally.”