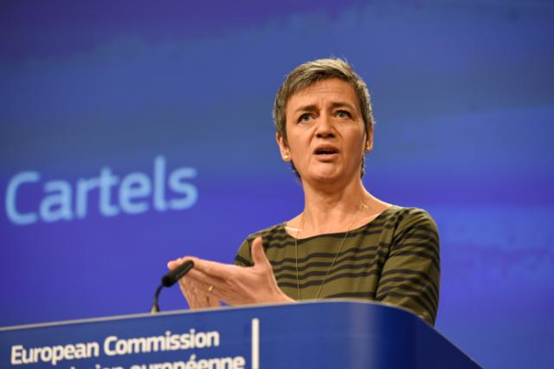 EU Competition Commissioner Margrethe Vestager said that the cartels have damaged European consumers by raising transport and component costs while hurting the competitiveness of Europe’s automotive sector, which employs around 12 million people.

"The three separate decisions taken today show that we will not tolerate anticompetitive behavior affecting European consumers and industries," said the commissioner.

The EU Commission found that the Chilean maritime carrier CSAV, the Japanese carriers 'K' Line, MOL and NYK, and the Norwegian-Swedish carrier WWL-EUKOR participated in a cartel concerning intercontinental maritime transport of vehicles, and imposed a total fine of €395 million.

"The commission's investigation started with an immunity application submitted by MOL. During its investigation, the commission cooperated with several competition authorities around the world, including in Australia, Canada, Japan and the US," the EU Commission said in the statement.

In second decision, the commission found that Germany’s Bosch and Japan’s Denso and NGK participated in a cartel concerning supplies of spark plugs to car manufacturers in the European Economic Area.

"The last of today's decisions is about hydraulic and electronic braking systems. It involves two cartels, one between Bosch, Continental and TRW, and one involving only Bosch and Continental," said Vestager.

Denso and TRW received immunity for exposing the cartels.

All companies acknowledged their involvement in the cartels and agreed to settle the cases.

According to local media outlet New Europe, the commission's decisions on the spark plug and braking system cartels are part of a series of major investigations into powerful lobbies in the automotive parts sector.