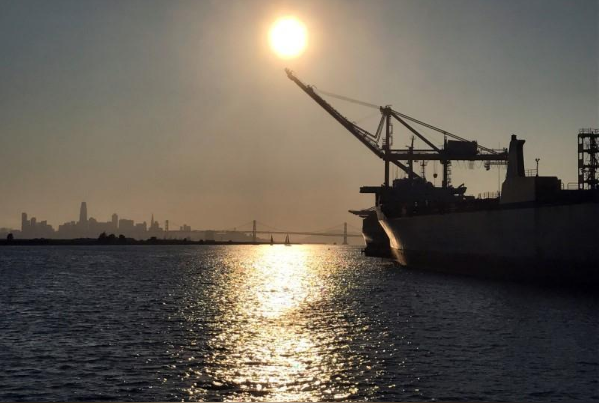 A cargo ship seen at sunset docked at the Port of Oakland with San Francisco and the San Francisco Bay Bridge in the background, California, U.S. on August 11, 2017. (Photo: Reuters)

The European Commission called for industry views on Friday on a list of U.S. products it will subject to import tariffs, the first step towards measures to counter planned U.S. taxes on European steel and aluminum.

The European Commission, which coordinates trade policy for the 28 EU members, has said that, if the EU is not exempted, it should set duties of 25 percent on a range of U.S. products, whose annual imports to the European Union are worth 2.8 billion euros ($3.45 billion).

The 10-page list of products the EU may subject to tariffs ranges from rice to orange juice, make-up, motorcycles, motor boats and stainless sinks. It also includes many metals products for use in construction and industry.

Some of the products, worth 2.8 billion euros, could be subject to duties within months. The EU says the U.S. cannot use national security as a justification for its metals tariffs, which means Europe can respond with “rebalancing” measures.

“We feel we are on very strong legal grounds,” an EU official said on Friday.

A second group of products would only incur duties if the WTO later declared the U.S. tariffs illegal or after a period of three years.

The two product sets combined would aim to counter-balance the damage of U.S. measures to the bloc’s 6.4 billion euros of aluminum and steel exports to the United States.

The Commission has asked “private stakeholders” affected by the U.S. tariffs and the EU’s possible response by March 26 after which it will present a formal proposal.

The EU’s 28 member states would also have to agree on any action.

It would notify the World Trade Organization (WTO) of potential counter-measures by May 23, or within 60 days of U.S. tariffs coming into force. The European Union would have to enact those measures in the following month.

Trump has ordered Ross to discuss “horrific” EU trade tariffs and barriers with Brussels and has also threatened to hit EU cars.

The EU disputes Trump’s line on tariffs and his emphasis on cars, for which the U.S. tariff, at 2.5 percent, is lower than the EU’s 10 percent. For other products, such as trucks, U.S. tariffs are higher.

“We are not negotiating with the United States our exemption... It is not acceptable to try to link a solution to this and any question to market access or trade negotiations,” the EU official said.