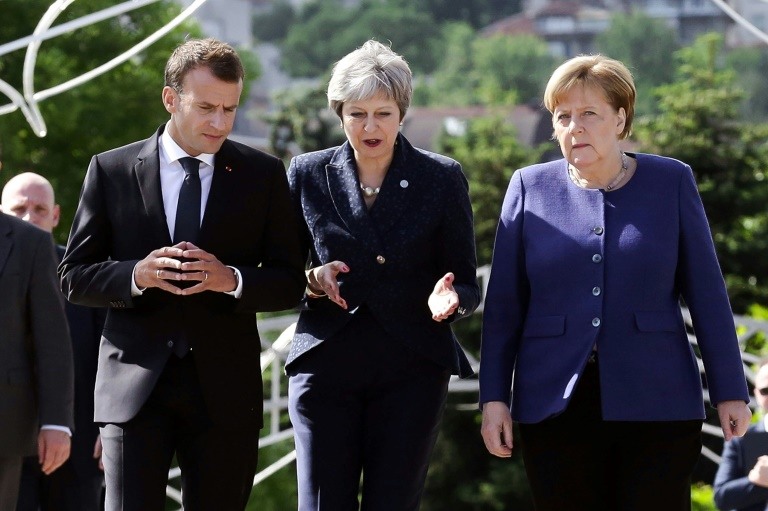 EU leaders meeting in Bulgaria pledged Thursday to refuse all trade talks with the United States unless Washington grants a permanent exemption from painful metals tariffs that are set to kick in on June 1.

However, as an incentive to US Commerce Secretary Wilbur Ross -- the hard-nosed negotiator for the Trump administration -- leaders floated ideas that could be acted on if Europe is let off the hook.

As a precaution if no solution is found, Europe has lined up its own punitive tariffs on American imports, including iconic items such as Harley-Davidson motorbikes and bourbon whiskey.

These measures will officially become enforceable next month, but Europeans have committed for now not to use them as talks with the US are still ongoing, in fear of sparking a trade war.

"The European position is a balanced position between those who have a more bellicose attitude and those who would like to maintain bridges and dialogue with the US," a European Union diplomat said on the sidelines of the talks in Sofia.

Following are the incentives offered by the Europeans:

The leaders said they could be open to trade talks with the US to lower tariffs on certain industrial -- but not agricultural -- products as well as to open public procurement markets.

The "limited" deal would focus in particular on cars, a strategic sector that US President Donald Trump has brought sharp attention to in several tweets.

US cars sold in the EU are slapped with 10 percent tariffs, while Washington imposes 25 percent duties on European pick-ups and trucks. However, customs duties between the two blocs remain low overall, at an average of three percent.

Any attempt to negotiate a trade deal, no matter how small, requires a mandate from member states. Export powerhouse Germany is very much in favour of launching the procedure while France is reluctant.

Whatever the case, EU leaders insist that there is no chance of relaunching the very unpopular TTIP talks, the major EU-US trade agreement torpedoed by Trump when he entered office last year.

European leaders have agreed to initiate a dialogue with Washington to cooperate on regulation, a big demand of multinationals that want more streamlined health and safety norms between Europe and the US.

However, a European source insisted that this proposal was limited to a dialogue, and would not attempt to align regulation between the two blocs, a crucial aspect of the failed TTIP talks.

At the request of the United States, Europeans are ready to "deepen relations in energy matters, in particular in the field of liquefied natural gas," a European source said.

As a result of the shale gas boom, the US is avidly seeking new export markets and wants to compete with Russia and Norway, the EU's main suppliers, on the European market.

Developing LNG, which is transported by ship rather than pipelines, would require reducing existing barriers and regulations between the EU and US.

"We have an interest in diversifying our sources of supply," the European source said.

Europe raised the possibility of backing a drive to reform the World Trade Organization, the international trade watchdog that Trump accuses of being soft on China.

This would include "finding mutually acceptable solutions" to lift the current freeze on appointments to the WTO Appellate Body.

For several months, Washington has blocked the appointment of new judges to settle disputes at the WTO, to the great displeasure of the rest of the international community, which accuses the US of taking the organisation hostage without making any proposals on its future.