HEADLINE Europeans work to save Iran deal, and business, after Trump pulls out

Europeans work to save Iran deal, and business, after Trump pulls out 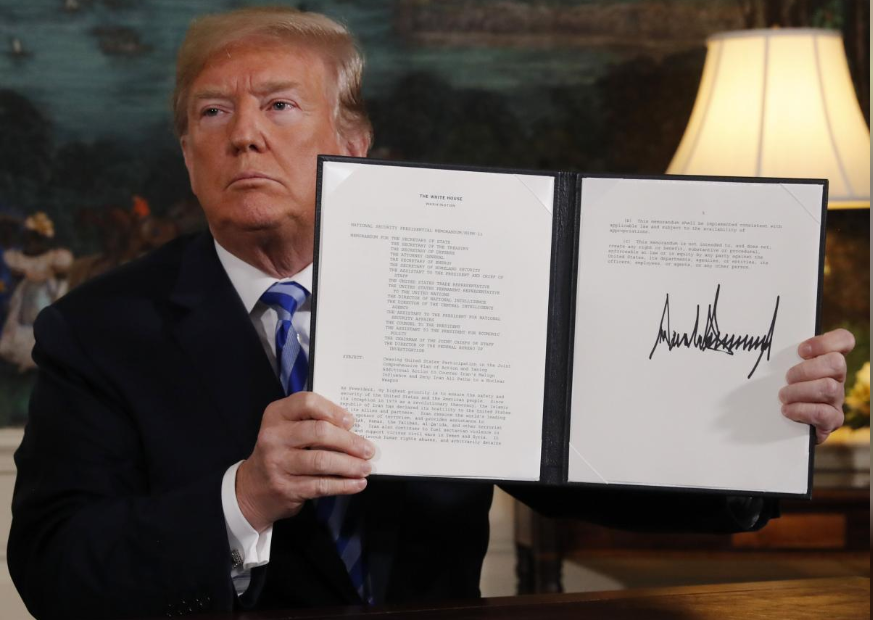 Dismayed European allies sought to salvage the international nuclear pact and preserve their business with Iran on Wednesday after President Donald Trump pulled the United States out of the landmark accord and ordered sanctions reimposed on Tehran.

“The deal is not dead. There’s an American withdrawal from the deal but the deal is still there,” French Foreign Minister Jean-Yves Le Drian said.

But Iranian President Hassan Rouhani, a pragmatist who helped engineered the 2015 deal to ease Iran’s economically crippling isolation, told French counterpart Emmanuel Macron in a phone call that Europe had only a “limited opportunity” to preserve the pact, the Iranian Students’ News Agency reported.

“(Europe)...must, as quickly as possible, clarify its position and specify and announce its intentions with regard to its obligations,” ISNA quoted Rouhani as saying to Macron.

Macron, who like other European leaders had lobbied Trump to keep the agreement signed before he took office, urged Rouhani to keep respecting the deal and consider broader negotiations.

Trump said on Tuesday he would revive US economic sanctions, which would penalize foreign firms doing business with Tehran, to undermine what he called “a horrible, one-sided deal that should have never, ever been made”.

On Wednesday, he said Iran would now either negotiate or “something will happen.” It was not immediately clear what actions he was suggesting would take place.

Iran has drafted a “proportional” plan to cope with the US move, the official news agency IRNA quoted government spokesman Mohammad Baqer Nobakht as saying. He said budgets had been drawn up to deal with various scenarios, though did not elaborate.

The fruit of more than a decade of diplomacy, the nuclear agreement was clinched in July 2015 by the United States, France, Britain, Germany, Russia, China and Iran.

It was designed to prevent Iran developing a nuclear bomb in return for the removal of sanctions that had crippled its economy, not least by Washington threatening to penalize businesses anywhere in the world that traded with Iran.

Trump complained that the deal, the signature foreign policy achievement of his Democratic predecessor, Barack Obama, did not address Iran’s ballistic missile program, its nuclear activities beyond 2025 or its role in conflicts in Yemen and Syria.

His decision raises the risk of deepening conflicts in the Middle East, puts the United States at odds with European diplomatic and business interests, and casts uncertainty over global oil supplies. Oil prices rose more than 2 percent, with Brent touching a 3-1/2-year high. [O/R]

The US pullout could also strengthen the hand of hardliners in Iranian politics at the expense of moderates like Rouhani who had pinned their hopes on the deal to boost living standards in Iran, with limited success so far.

Iranian Supreme Leader Ayatollah Ali Khamenei, a hardliner, said: “Mr Trump, I tell you on behalf of the Iranian people: You’ve made a mistake ... I said many times from the first day: don’t trust America.”

France’s Le Drian, German Chancellor Angela Merkel and the International Atomic Energy Agency (IAEA) all said Iran was honoring its commitments under the accord.

The European Union said it would ensure sanctions on Iran remain lifted, as long as Tehran meets its commitments.

Merkel said that, while the existing deal should not be called into question, there should be discussion of “a broader deal that goes beyond it”.

British Foreign Secretary Boris Johnson spoke of a “follow-on agreement” but said it was now up to Washington to come up with concrete proposals. Macron said he wanted a broader discussion with all relevant parties on the development of Iran’s nuclear program after 2025, when key elements of the current deal expire, as well as Iran’s ballistic missile program and wider Middle East issues.

Iranian officials will next week meet counterparts from France, Britain and Germany. Khamenei appeared skeptical whether they could deliver: “I don’t trust these three countries.”

The chances of saving the deal without Washington depend largely on whether international firms are willing and able to keep trading with Iran despite the threat of US sanctions.

In a sign of what may be in store, Trump’s ambassador to Berlin tweeted, within hours of taking up his post, that German businesses should halt activities in Iran at once.

Britain, France and Germany said they would do all they could to protect their business interests in Iran, yet it was unclear how far they would be able to shield firms from US sanctions.

Brussels has a “blocking statute” at its disposal that bans any EU company from complying with US sanctions and does not recognize any court rulings that enforce American penalties.

But the statute has never been used and is seen by European governments more as a political weapon than a regulation, because its rules are vague and difficult to enforce.

British Prime Minister Theresa May’s spokesman made the limits of potential action clear: “UK businesses may wish to consider the implications for their business activities in Iran and, where necessary, seek appropriate legal advice.”

A senior French diplomat said businesses would ultimately be forced to choose between their Iranian economic interests and their potential US interests, adding: “Generally, that decision is quickly made in favor of the US”

Hardline lawmakers in Iran’s parliament burned a US flag and a symbolic copy of the deal, known officially as the Joint Comprehensive Plan of Action (JCPOA), chanting “Death to America!”

Rouhani, whose position could be weakened by a blow to Iran’s economy, struck a more conciliatory tone in a televised speech, saying Iran would negotiate with EU countries, China and Russia.

“If at the end of this short period we conclude that we can fully benefit from the JCPOA with the cooperation of all countries, the deal will remain,” he said.

Trump’s decision compounded strains on the transatlantic alliance since he took office 16 months ago. One by one, European leaders came to Washington and tried to meet his demands, while pleading with him to preserve the deal.

The Trump administration kept the door open to negotiating another deal, but it is far from clear whether the Europeans would pursue that option or be able to win Iran over.

A Western diplomat who declined to be named said the decision “announces sanctions for which the first victims will be Trump’s European allies”.

Abandoning the pact was one of the most consequential decisions of Trump’s “America First” policy, which has led him to quit the global Paris climate accord, come close to a trade war with China and pull out of an Asian-Pacific trade deal.

It also appeared to reflect the growing influence within the administration of Iran hawks such as new National Security Adviser John Bolton and Secretary of State Mike Pompeo, who arrived in Pyongyang on Wednesday to prepare for a summit that Trump hopes will secure North Korea’s denuclearisation.

Iran denies longstanding Western suspicions that it tried in the past to develop atomic weapons and says its nuclear energy program has been for peaceful purposes.

Senior US officials themselves have said several times that Iran is in technical compliance with the nuclear pact.

Renewing sanctions would make it much harder for Iran to sell its oil abroad or use the international banking system.

Iran is the third-largest member of the Organization of the Petroleum Exporting Countries, pumping about 3.8 million barrels per day of crude, or just under 4 percent of global supply. China, India, Japan and South Korea buy most of its 2.5 million bpd of exports.

Iran’s rial currency plunged to a record low against the US dollar in the free market, after sliding for months because of a weak economy, financial difficulties at local banks and heavy demand for dollars among Iranians who feared that renewed US sanctions would hit Iranian exports hard.

“I am scared,” 47-year-old Isfahan school teacher Morad Sabzevari said by telephone. “I listened to Trump’s speech on English news channels last night ... It was a declaration of war against Iran ... It means dark days and months are ahead of us.”

The US Treasury says sanctions related to Iran’s energy, auto and financial sectors will be reimposed in three and six months.

Trump said the nuclear agreement did not prevent Iran from cheating and continuing to pursue nuclear weapons. “It is clear to me that we cannot prevent an Iranian nuclear bomb under the decaying and rotten structure of the current agreement.”

Other world power signatories disagree, and the IAEA says it has the world’s toughest nuclear verification regime in Iran.

Trump said he was willing to negotiate a new deal with Iran, but Tehran has already ruled that out.

Among the few nations to welcome Trump’s decision were Israel and Saudi Arabia, Iran’s arch-foes in the Middle East.

Less than 24 hours after Trump’s announcement, Saudi Arabia said it had intercepted missiles fired at Riyadh by the Iran-aligned Houthi forces it is fighting in Yemen.