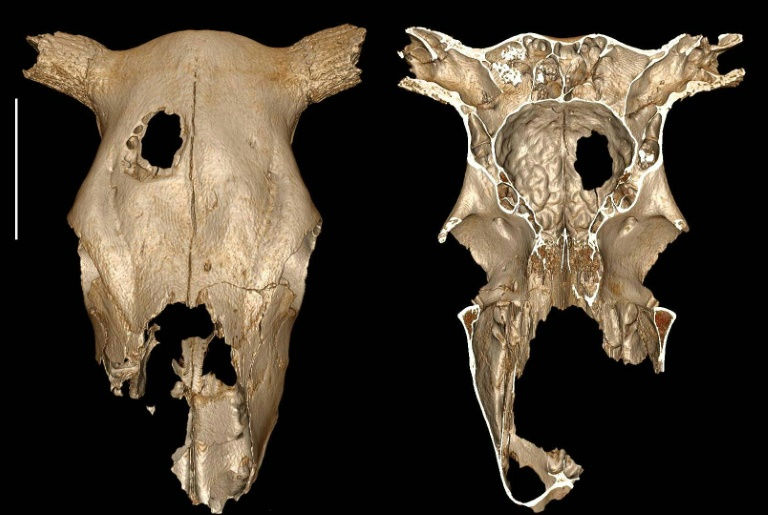 This handout picture shows a 3D reconstruction of a cow skull with a hole produced by trepanation.(Photo: AFP)

A hole in the skull of a Stone Age cow was likely made by humans about 5,000 years ago, probably by a primitive veterinarian or trainee surgeon, scientists said Thursday.

The hole appears to have been painstakingly carved into the animal's head, but whether it was an operation to save the cow or practice for surgery on humans, was not clear, a duo of anthropologists reported in the journal Scientific Reports.

Either way, the puncture does seem to represent the earliest known example of veterinary "trepanation" -- the boring of a hole into the skull, they said.

"There are many Neolithic (human) skulls in Europe which bear the marks of trepanation. But we have never seen it in animals," co-author Fernando Ramirez Rozzi of France's CNRS research institute told AFP.

The Neolithic era was the closing chapter of the Stone Age -- a time when prehistoric humans, hunter-gatherer nomads until then, first tried their hand at cultivating crops and building permanent villages.

The cow skull comes from an archaeological site in western France, inhabited by a Stone Age community between 3,400 and 3,000 BC.

Bone fragments scattered around the camp showed that cows were the main source of food, along with pigs, sheep, and goats.

It was thought at first that the matchbox-sized hole was made when the cow was gored by a horned rival in a fight.

But on closer inspection with high-definition scanners, the team found no splintering or fractures consistent with such a strong blow.

The puncture was too regular to have been the work of a gnawing pest, nor did it appear to have been made by a tumour or infectious disease, such as syphilis or tuberculosis, as the skull showed no other signs of sickness.

Religious ritual also seemed an unlikely explanation, as the skull was thrown away with the rubbish.

Cut- and scrape marks were found around the hole, said Rozzi -- similar to those seen on Neolithic human skulls into which holes had been bored.

"I believe that the evidence of trepanation is indisputable," the researcher added. "It is the only possible explanation."

But why would a Stone Age human operate on an animal?

"There are two possible explanations," according to Rozzi.

"Either they were treating the cow, or they were practicing on it before trying their hand at surgery on humans."

The first option seemed unlikely, he added, given that cows were in such abundance.

The team could not determine whether the hole was made while the cow was still alive, or after it died.

The bone, however, had not started regrowing around the hole, which showed the cow either did not survive the operation, if there was one, or was cut post-mortem.