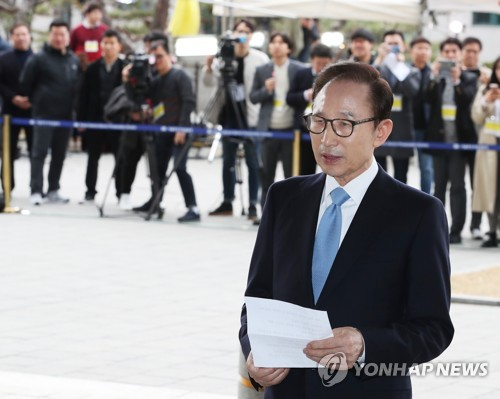 Lee appeared at the Seoul Central District Prosecutors' Office in southern Seoul the previous day to answers questions on bribery, embezzlement and abuse of power.

Prosecutors said the questioning ended at around midnight, but it took more than six hours for him to review statements compiled by the investigators.

The questions focused on whether the former president was aware of the illegal funds and whether he is the secret owner of his brother's auto company DAS. Prosecutors believe that Lee holds more than 80 percent of the company's shares under borrowed names. They also believe Lee is responsible for the illegal provision of 11 billion won from the National Intelligence Service, the state’s main spy agency, for personal purposes through his aides, Samsung Group and others. This includes from a former chief of a major banking group, around the time of his election win and in the early years of his term in office.

Wednesday's summons came after state prosecutors, over the past few months, questioned numerous figures around Lee including his son, nephew and brother, as well as presidential secretaries who worked with him during his term from 2008 to 2013.

Lee has denied most of the charges against him. He used to make a direct criticism of the current administration's efforts to eradicate what is being called 'wrongdoings of the past'.

Lee appeared at the Seoul Central District Prosecutors' Office at 9:23 am on March 14, after an 8-minute car ride from his residence in southern Seoul. Before the press, he apologized for causing concern.

"I stand here today with a devastated heart," Lee said. "I am deeply sorry to the Korean citizens for causing concerns over matters related to me while our economy is struggling and the security environment surrounding the Korean Peninsula is very grave."

He said that he has much to say as a former president but said he’s decided to save his words. “I just hope that this will be the last time in history that this happens," he added.

When asked by a reporter if he accepted the allegations against him, Lee did not respond.

Lee is the fifth former South Korean president to face an investigation. His successor Park Geun-hye was ousted from office last year and charged over a massive influence-peddling scandal.

Former Presidents Chun Doo-hwan and Roh Tae-woo stood trial in the mid-1990s for corruption and mutiny charges for staging a 1979 military coup before they were pardoned in 1997 by then-President Kim Young-sam.

Late President Roh Moo-hyun was subpoenaed in 2009 over a corruption scandal involving his family. The probe ended after he committed suicide in May of that year.

The prosecution investigation took place in the special interrogation room 1001, the same place former President Park Geun-hye was questioned a year ago. The inquiry was videotaped as consented to by the former president.