Child "interacts" with the Digital Palace Museum at the exhibition of China's progress over the past five years in Beijing, China's capital, Oct. 15, 2017. Photo: People's Daily Online

Beijing-A Beijing exhibition of China's greatest achievements over the past five years has drawn the applause of both Chinese and foreign visitors who said they were impressed by what the country has achieved since the 18th National Congress of the CPC.

The exhibition, which was opened in late September, has attracted more than 700,000 people so far. A visitor, 72-year-old Sun, remarked ,"I want to feel more about our stronger nation here," after visiting the exhibition with her husband during the National Day holidays in early October.

Sun had come all the way from northeast China's Heilongjiang Province and explained that the exhibition was an important stop in the couple's itinerary because they may have fewer long journeys in the future. 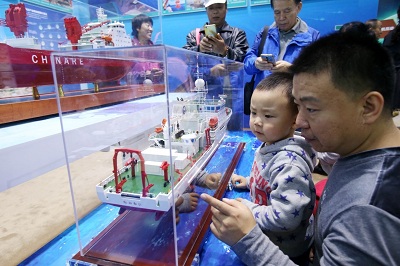 Visitors look at a model of Xiangyanghong 01, China's scientific research ship, at the exhibition of China's progress over the past five years in Beijing, China's capital, Oct. 15, 2017. Photo: People's Daily Online

China has contributed to more than 30 percent of global economic growth, with an economy that has grown at an average rate of 7.3 percent since 2012. It also managed to lift at least 10 million of its people out of poverty each year.

The latest Global Innovation Index showed China at 22nd place on the list of most innovative nations in 2017, the first ever middle-income country to join the top 25 club. It came in at the 34th, in 2012.

Foreign guests also gave the thumbs-up to China's position. Andrei Denisov,Russian Ambassador to China, said, "I came to China as ambassador more than four years ago and have witnessed the rapid development the nation scored in all sectors, especially the technological field since the 18th CPC National Congress." 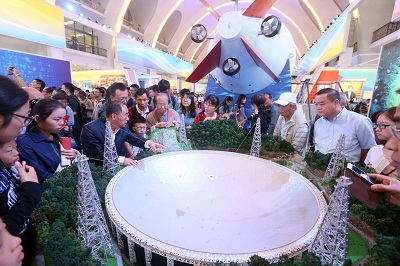 Visitors get an introduction to China's 500-meter Aperture Spherical Radio Telescope (FAST), nicknamed "Tianyan", at the exhibition of China's progress over the past five years in Beijing, Oct. 1, 2017. Photo: People's Daily Online

"The exhibition impresses me with the dramatic changes Chinese society has gone through," the Georgian Ambassador to China David Aptsiauri told the media, adding that the CPC has grown stronger with the support of all Chinese.

"The exhibition is so great!" was the comment of Rahmad Nasution, a journalist from Indonesia's Antara News Agency, who visited the exhibition on Friday with nearly 100 foreign reporters. She concluded, "I want to show my admiration to the Chinese people."

On display to catch the eye of reporters who come to cover the 19th CPC National Congress, were models of China's manned submersible, Jiaolong, the new bullet train,  "Fuxing", and a new super computing system, Sunway-Taihu Light.

"You are a party that brings the people peace and prosperity," said Win Tin, Editor-in-Chief of Myanmar's Northern Light Journal. He also extended best wishes to the CPC from foreign reporters, and added that they hoped China would create more development opportunities for the world. 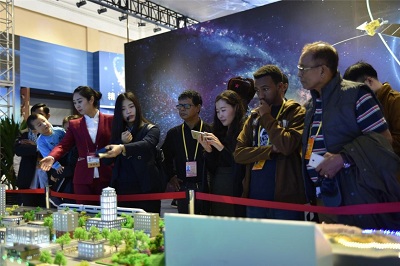