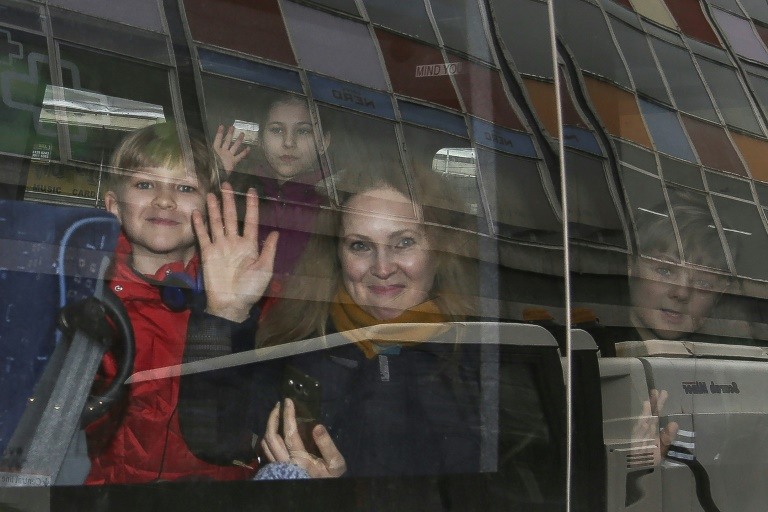 Britain has thrown out 23 Russian diplomats over the nerve agent attack on former Russian spy Sergei Skripal and his daughter Yulia on March 4. (Photo: AFP)

Russian diplomats expelled from Britain in the worsening spat over the poisoning of a former double agent left the London embassy on Tuesday with their families in tow.

Britain has thrown out Russian 23 diplomats over the March 4 nerve agent attack on former Russian spy Sergei Skripal and his daughter Yulia in an English town.

People hugged outside the embassy before boarding a waiting fleet of diplomatic vehicles. Around 80 people in total were thought to be leaving.

The expulsion came as British police said the investigation into the poisoning could take months to complete, while Foreign Secretary Boris Johnson accused Russia of "trying to conceal the needle of truth in a haystack of lies".

The first offensive use of chemical weapons in Europe since World War II has plunged relations between Moscow and London into crisis.

Britain says only Russia had the capability, motive and intent to be behind the attack, which used the nerve agent Novichok reportedly developed by the former Soviet Union. Russia denies any responsibility.

It is one of the largest and most complex investigations ever undertaken by British counter-terror policing.

"Our focus is on the movements of the Skripals."

Around 250 detectives are examining 400 witness statements and nearly 800 items that have been seized.

EU leaders plan to say they will "coordinate on the consequences" for Russia but will stop short of mentioning sanctions or other diplomatic measures, according to a draft summit statement seen by AFP.

The 28 leaders meeting in Brussels on Thursday will base their response on what answers Moscow provides, the draft says. 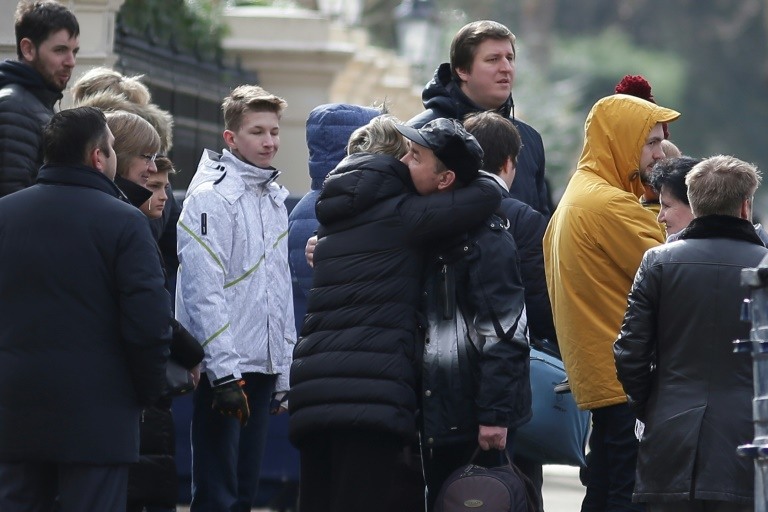 Some diplomats were seen holding pet carriers as they made their way to the three cars, five people carriers and two small coaches waiting. (Photo: AFP)

The statement says the European Union "condemns in the strongest possible terms" the attack.

Skripal, 66, a former Russian officer who sold secrets to Britain and moved there in a 2010 spy swap, remains in a coma along with his 33-year-old daughter after they were found unconscious on a bench in Salisbury, England.

Investigators from the international Organisation for the Prohibition of Chemical Weapons (OPCW) arrived in Britain on Monday to collect samples of the nerve agent.

Testing in international laboratories is expected to take at least two weeks.

Also on Tuesday, a Russian scientist told state media that he worked on an official programme to produce Novichok, contradicting Moscow's claims it never developed the nerve agent.

Leonid Rink, who told RIA Novosti he worked on a state-backed programme up to the early 1990s, added that the Skripals would be dead had Moscow been involved in his poisoning.

"They are still alive. That means that either it was not the Novichok system at all, or it was badly concocted, carelessly applied," he said.

Rink said he worked with a large group of specialists at a state laboratory in the closed town of Shikhan for 27 years, where the development of Novichok formed the basis of his doctoral dissertation.

Britain's Johnson said the "obvious Russian-ness of the weapon" was "designed to send a signal to anyone pondering dissent".

"The message is clear: we will hunt you down, we will find you and we will kill you -- and though we will scornfully deny our guilt, the world will know that Russia did it," he wrote in The Daily Telegraph newspaper.

Meanwhile Japanese Prime Minister Shinzo Abe voiced his "outrage" over the attack and urged Moscow to respond in a serious manner, in a phone call with British Prime Minister Theresa May.

Abe "condemned the incident" and said Japan "shared our outrage" according to a spokesman for May's Downing Street office.

They agreed that Russia "must respond in a serious manner, including by cooperating fully with the OPCW investigation".