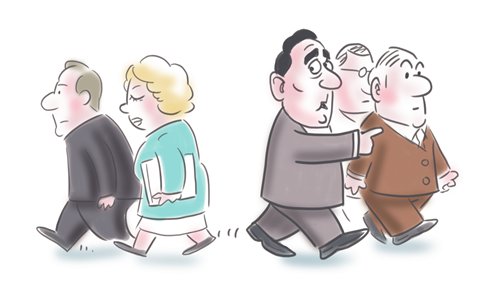 The US, Canada, Germany, France and other European countries joined Britain in expelling Russian diplomats in response to the alleged poisoning of a former Russian spy in the UK. The "extraordinary international response by our allies stands in history as the largest collective expulsion of Russian intelligence officers ever and will help defend our shared security," British Foreign Secretary Boris Johnson said via Twitter. The European Council denounced Russia and expressed support for the UK at its just-concluded spring summit.

The EU's anti-Russia wave this time is of unprecedented scale and intensity, far exceeding that during the Ukrainian crisis. The EU's chiming in with the UK and the US, and hyping the Russia threat is an attempt to safeguard the so-called solidarity and prestige of the West.For a long time, Western countries have been regarding Russia as a geopolitical threat and challenge. The Russia-West relationship is permeated with suspicions and vigilance, and dropped to a freezing point following the Ukrainian crisis. The West has become unprecedentedly upset about Russia's development, and as a result, opposition to the Kremlin is an act of political correctness for most Western states. Although the US and the EU hoped to ease tensions in their ties with Russia to a certain degree, they, while seeking dialogue, insist on sanctions for Moscow. Prolonging sanctions against Russia has been unanimously approved at every EU summit since the Ukrainian crisis. Without solid evidence, the West raises the issue of the poisoning of a former Russia intelligence officer to a higher plane of principle, and hypes that it's the first time a chemical weapon was used in Europe since World War II. This can be seen as the West's instinctive reaction to a perceived Russian threat. The EU is using the poisoning incident as an adhesive to maintain Western solidarity. Since Donald Trump came to office, Washington has been acting unscrupulously on issues of trade, NATO, global governance, the Middle East and EU integration. This has jeopardized the economic, political and security interests of European countries, shaken the basis of the US-EU relationship and meanwhile is perilous to the West's global influence and credibility, as well as the values and the rule-based global order proposed by the West. Western elites believe that EU-US coordination is the first step to restoring West-dominated order. Under pressure from pro-establishment forces and with the Russia-gate investigation dragging out, Trump's efforts to restore ties with Russia have to give way to the need to stay politically correct.The EU has attached great importance to the principle of keeping a unified stance in diplomacy and security. But given divergent interest appeals among member states, the principle hasn't been fully implemented on many issues ranging from the Iraq war to the Ukrainian crisis. In recent years, as the EU has been hit by multiple crises, differences among member states have become increasingly obvious. The EU has become more sensitive in its pursuit of unity and even blames exterior forces for rifts within its bloc. From the EU's perspective, now that Russia is a geopolitical challenge for all EU members, jointly pressuring the Kremlin would be a good opportunity to show the bloc's diplomatic unity. The UK and Poland, which have obstructed EU integration in recent years, are known for their anti-Russia traditions and their unified stance with Brussels can vividly demonstrate the EU's will to maintain unity and safeguard regional security.The EU's intent to unite its members by confronting Russia only reflects diplomatic differences within the bloc. For the EU, shaping a unified diplomatic and security policy depends on coordinating the interests of member states. The EU still faces challenges in coordinating diplomatic stances among its members. EU integration will have to overcome many major obstacles. The just-concluded general election in Italy highlights the strength of populists in shaping the country's policies. The new German government may become more prudent and cautious in its EU policy. This will further slow the EU integration process. Major powers' advocacy of diplomatic unity is, in essence, an endeavor to seek their own national interests. For instance, while concerned about the effects of a Hungary-Russia nuclear plant deal on energy security, Germany, taking domestic demand for gas into consideration, holds a positive attitude toward the Russia-built Nord Stream 2 gas pipeline. Some small nations have no intention of escalating tensions with Russia, but are forced to oppose the Kremlin under political pressure from the Western major powers. Greece earlier called on the UK and the EU not to make any decision before a thorough investigation. Austria and Slovakia have indicated they will not expel any Russian diplomats. Given the above, the EU still faces difficulties in shaping unified diplomatic policies.