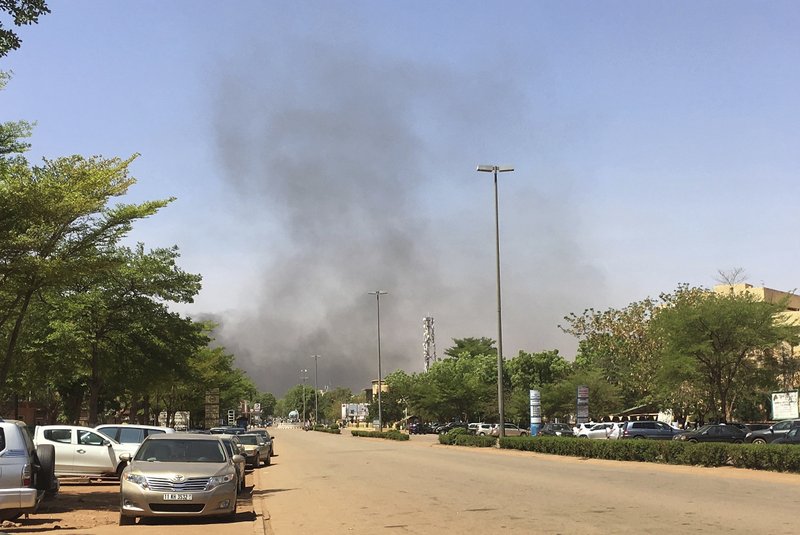 Islamic extremists opened fire on the French Embassy and army headquarters in separate attacks in Burkina Faso’s capital Friday, and at least four of them were killed by armed forces, the communications minister said.

One witness also said several soldiers were killed at the army facility, but there was no confirmation from the government or military.

It was not immediately clear how many militants were involved in the attacks, which left several people wounded, said Souro Sanou, an official at a hospital in Ouagadougou. He had no other details on the casualties.

Jean Bosco Kienou, director general of Burkina Faso’s police, and French Prime Minister Edouard Philippe both called it a terrorist attack. There was no claim of responsibility.

Gunfire and explosions resounded for hours but subsided by midday. Workers fled offices near the site of the violence, and helicopters were seen above the embassy.

Defense and security forces responded to the attacks, police said, and barricades were set up.

Witnesses at the state television offices that face the embassy told The Associated Press that five attackers arrived in a pickup truck and started shooting after shouting, “Allahu Akhbar.” They then set fire to the truck and began shooting, the witnesses added.

The neighborhood also houses other embassies, the prime minister’s office and UN offices.

The assailants there also arrived in a pickup and starting shooting at soldiers, said Moussa Korbeogo, a trader at a nearby market.

“Some of the soldiers ran into a nearby bank to seek shelter. Several were killed outside and inside the premises,” Korbeogo said.

There was no official confirmation of casualties among the security forces.