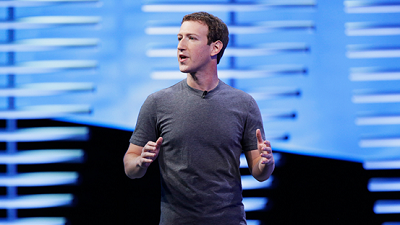 Facebook has been in a pickle since last week. It was accused of a data leak involving more than 50 million users’ personal information.

The company reportedly stores users’ phone calls and text messages on Android devices. A user found calls and text logs from his phone for at least a year in his archived data from Facebook.

The company admitted that Messenger and Facebook Lite users with Android phones, once they uploaded contacts and switched on a certain option, would have their calls and text history logged.

Last week, Cambridge Analytica, a political consultancy agency which worked for Donald Trump's presidential campaign, has been accused of using the data in strategies for the 2016 US presidential election.

According to NASDAQ, Facebook suffered its biggest one-day decline since 2012 following the news, and has tumbled 13.9% for the week. CNN reported that the scandal sent the company's value plunging by almost $50 billion last week and Zuckerburg has come under harsh criticism.

On foreign social media, a #deletefacebook hashtag has caught on.

On Sunday, Facebook issued a full-page apology in several major American and British newspapers, with the signature of Mark Zuckerburg, founder and CEO of the social media giant.

"This was a breach of trust, and I'm sorry we didn't do more at the time. We're now taking steps to ensure this doesn't happen again," read the ads.

The ads said the social media company was now "limiting what data apps get" when users sign in, and was also "investigating every single app that had access to large amounts of data” before it fixed the problem. 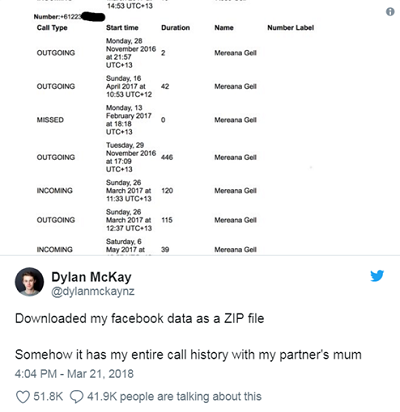 A New Zealand man discovered Facebook had about two years' worth of phone call metadata from his Android phone, including names, phone numbers, and the length of each call made or received. (Photo: Twitter/@dylanmckaynz)

According to the ad, Facebook will be reminding users which apps they'd previously given access to, giving them the opportunity to "shut off the ones you don't want anymore."

"I promise to do better for you," said Zuckerberg.

Facebook said the data in question was properly gathered a few years ago by a psychology professor for academic purposes. But the information was later transferred to third parties, including Cambridge Analytica, which violated Facebook policies.

However, the apology cannot eventually help the firm get out of trouble. A group of 37 state attorneys general say they have sent a letter to Zuckerberg "demanding answers…about the company's business practices and privacy protections."

The letter asks whether company's terms of service were "clear and understandable," if the company had safeguards in place to make sure collected data was misused, and when Facebook learned of the data breach, among other questions. 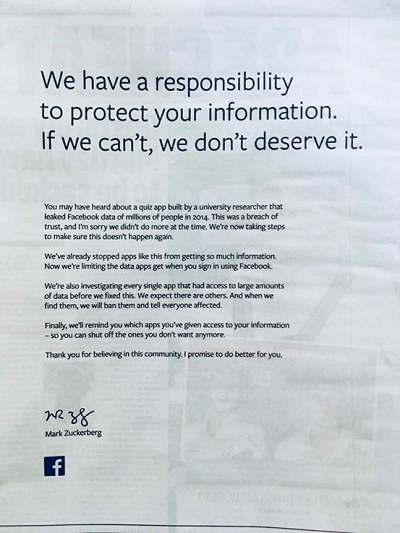 What’s more, Zuckerburg has been invited to testify at a Senate panel hearing on data privacy on April 10.

The social media giant may have harvested more about users than you supposed.

The company reportedly stored logs of calls and text messages made by users with Android devices. The issue was discovered when one user tweeted that when he downloaded his data from Facebook, it included call and texts logs from his phone for at least a year. The issue appears to only affect Android users because Apple devices don’t allow third-party apps like Facebook to access call and message data.

The company has now acknowledged that Messenger and Facebook Lite users with Android phones, who uploaded contacts and chose the "opt-in" option, did have their call and text history logged.

At the bottom of Facebook’s Settings page, there’s a line that’s easy to miss: “Download a copy of your Facebook data.” It’s been there for years and it’s not particularly hidden, but few people ever had cause to click it. So what does your archive say?

Your relationships, your email addresses, the names you used on Facebook, your workplaces, and all the things you “liked”. Moreover, everything you and others posted is there.

Also present are the ad topics Facebook thinks you’d be into, the ads you’ve actually clicked on, and the advertisers that possess your data.

Eventually, the private messages and phone call record. Even if you get new phones or clear your old phone texts, Facebook has already stored the information.

Troubles come to Zuckerburg one after another since last week. The world is watching how the media-star CEO will handle all these issues and bring Facebook back to a normal. As the founder of social media in the world, he is now standing at the turning point of his social media giant.