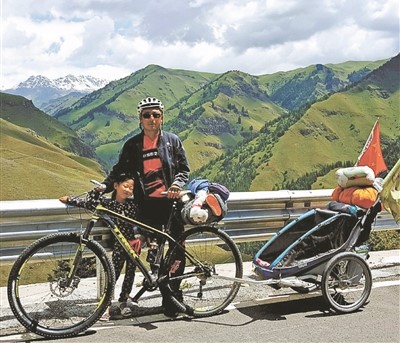 When Qi Hailiang noticed his daughter, Liuyi, was not enjoying her kindergarten class, he decided to give her an alternative education by taking her on a journey across several provinces to explore the world around them, Beijing Youth Daily reports.

According to Beijing Youth Daily, Liuyi was born in 2011 when Qi was in his late 30s. Liuyi was then enrolled in kindergarten when she was 2 years old.

However, Qi and his wife noticed that Liuyi was frustrated with starting school.

After Liuyi started going to school, Qi noticed her attitude was beginning to change.

“I was concerned with what Liuyi was learning at school, so I told myself I would educate her using different methods,” Qi said.

Liuyi seemed to be more interested in cars and other material items. It was during this time when he decided that he would educate his daughter on his own.

In September 2015, Qi started planning their journey. Back then, his only means of transportation was a bicycle that had a small trailer attached to it. This is where Liuyi was going to sit during their journey together.

Departing from their hometown of Tangshan, in Eastern Hebei Province, Qi and Liuyi’s bike journey lasted for two years. They crossed through several provinces, including Tibet.

“We both grew during the journey,” Qi said. “For two years, we spent every day together. I learned a lot about my little girl.”

“I wish parents could spend more time with their children and take them out to see different places,” Qi said. “It is a good way to learn.”

Qi said he and his daughter will never stop exploring the world and that they have agreed to resume their unfinished journey during their next vacation.