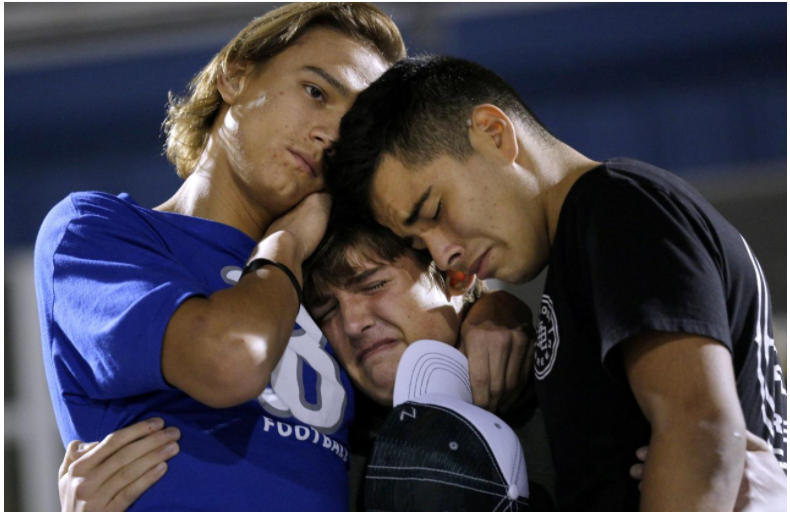 Daniel Friesenhahn (C) is comforted by Derrick Barnhardt (R) and Chris Johnson during a vigil in the memory of those killed in the shooting at the First Baptist Church of Sutherland Springs in La Vernia, Texas, U.S., November 7, 2017. REUTERS/Jonathan Bachman

For about 48 hours after a deadly rampage at a Texas church, the FBI and other law enforcement agencies did not ask Apple Inc to help them unlock the gunman’s iPhone or associated online accounts, a source told Reuters on Wednesday.

A cellphone belonging to Devin Kelley - accused of killing 26 people before taking his own life - was sent to the Federal Bureau of Investigation’s Quantico, Virginia, crime lab because authorities could not unlock it, Christopher Combs, head of the FBI’s San Antonio field office, said on Tuesday.

Combs did not specify what kind of phone Kelley had during the attack in Sutherland Springs, Texas, but the Washington Post reported on Tuesday that it was an iPhone, citing sources close to the investigation.

The Reuters source said that in the 48 hours between Sunday’s shooting and Comb’s news conference Apple had received no requests from federal, state or local law enforcement authorities for technical assistance with Kelley’s phone or his associated online accounts at Apple.

The delay may prove important. If Kelley had used a fingerprint to lock his iPhone, Apple could have told officials they could use the dead man’s finger to unlock his device, so long as it had not been powered off and restarted.

But iPhones locked with a fingerprint ask for the user’s pass code after 48 hours if they have not been unlocked by then.

Officials also could have asked for data from Kelley’s iCloud online storage account if he had one. If it receives a warrant or court order, Apple will give law enforcement authorities iCloud data, as well as the keys needed to decrypt it.

If an iPhone user backs up their iPhone using iCloud, the online data can contain texts, photographs and other information from the phone.

It could not be learned whether Apple had received a court order to turn over iCloud data.