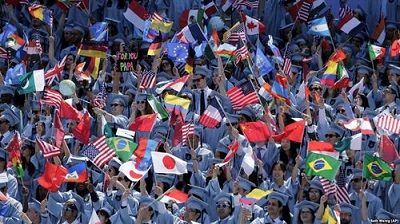 For the first time in 12 years, the number of new international students enrolling at US universities has dropped, according to a report released recently by the Institute of International Education (IIE) and the US Department of State Bureau of Educational and Cultural Affairs.

Those newly enrolled at a US institution in fall 2016, declined by nearly 10,000 students to about 291,000, a three percent decrease from the previous year—marking the first time there has been a decrease since statistics started being tracked 12 years ago.

The report also shows that the number of international students in the United States only increased by three percent over the prior year, indicating a clear slow-down as compared with the double-digit growth a few years ago. Meanwhile, more American students are pursuing degrees from foreign colleagues. The number of American students studying abroad increased by four percent from the prior year.

Students from China account for nearly one-third of foreign enrollees in the United States. The Chinese total surpassed 350,000 in fall 2016, up 7% from the previous year. India ranked second, with 186,000 students last fall, up 12%. However, another study conducted earlier this year showed that 25% of the respondents in US universities said that the number of undergraduate applications from Chinese students dropped this year; 26% of respondents said applications for undergraduate admission from Indian students have declined.

While the data in the report captures the situation before Trump took office, what’s happening this year shows no sign for optimism. In February, six higher education associations in the United States conducted a joint survey covering 250 colleges and universities across the country to measure the number of international students applying for admission in the fall of 2017. According to the survey, 39% of the respondents said that the number of international applications has declined, while only 35% of respondents have witnessed increased applications from abroad. Meanwhile, 26% of the universities have indicated no significant changes.

Experts have suggested that this dip in numbers is related to President Donald Trump’s administration, who has implemented a series of controversial immigration policies. Not only pushing forth travel bans, Trump has also worked to reverse the Deferred Action for Childhood Arrivals policy and the Temporary Protected Status program, both of which have important influence on students nationwide.

Rajika Bhandari, head of research for the IIE, told the People’s Daily, many American colleges and universities are currently worried about the declining number of international students to study in the United States. Many colleges and universities believe the social and political factors in the United States, such as visa policies and the status of campus security, are affecting the decisions of international students.

Dennis Hanno, president of Wheaton College in Norton, Mass., wrote in a Washington Post article, “Our political climate appears to be the problem. Current public debate here in the United States, which includes that yet-to-be enforced executive order temporarily banning immigration from six countries, has encouraged international students to look elsewhere for their degrees. The impact of this change in attitude is being felt at many colleges and universities, where the number of international students expected this year will decline after a decade of growth.”