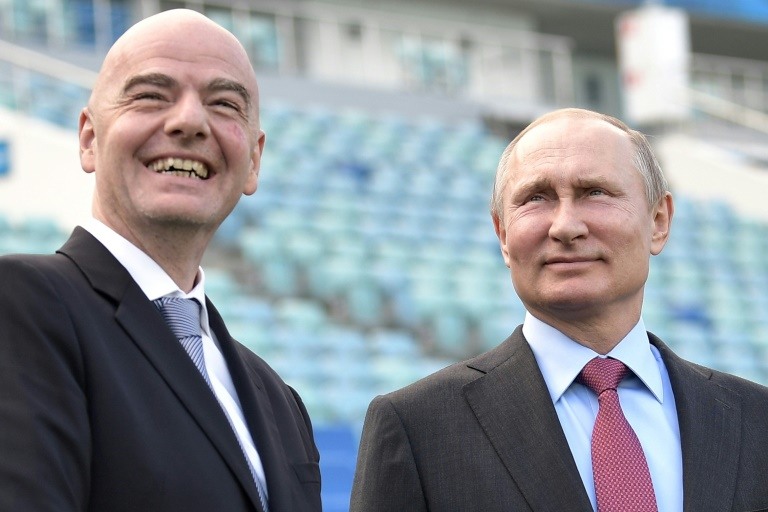 Infantino met Putin in the Black Sea resort of Sochi as Russia races against the clock to put the finishing touches on preparations for the June 14-July 15 final.

The first World Cup staged in eastern Europe will be the most expensive ever and comes in the heat of flaring tensions between Russia and the West.

It has also been shadowed by stadium construction delays and fears ranging from hooliganism to racist chants at matches.

But Infantino lavished praise on Russia's preparations and said the tournament was shaping up to be the best one yet.

"You are working to make this World Cup the best World Cup ever," Infantino told Putin during a nationally televised meeting.

"The feedback from all our experts at FIFA are extremely positive.

"And this shows that Russia is absolutely ready to host the world to celebrate a summer of festivities here in this beautiful country," he said.

Putin and Infantino began the day by posing for the cameras and getting Fan ID cards issued by the Russian authorities to supporters who pass a required security background check.

The two then toured Sochi's Fisht Stadium -- scene of the 2014 Winter Olympics -- and listened to leaders of regions where the games will be played.

The tournament will span 12 stadiums and 11 host cities across the European part of Russia.

The Russian leader also praised organisers and listed ways in which the tournament would benefit host cities in the long term.

But he sounded a sterner note when discussing the Russian team's prospects once the games begin.

"We all very much hope that our players will commit themselves to the game, will give all they got, playing to their full potential," said Putin.

"And the most important thing -- they must show hard-nosed, uncompromising football, one which the fans love."

Russia have not made it past the group stage of an international tournament in 10 years and will be under intense pressure to perform at home.

Putin is using the prestige of the event to showcase Russia's superpower status and wants the national team to play its part on the pitch.

But coach Stanislav Cherchesov's men have been hit by a string of injuries and are seen as one of the tournaments underdogs.