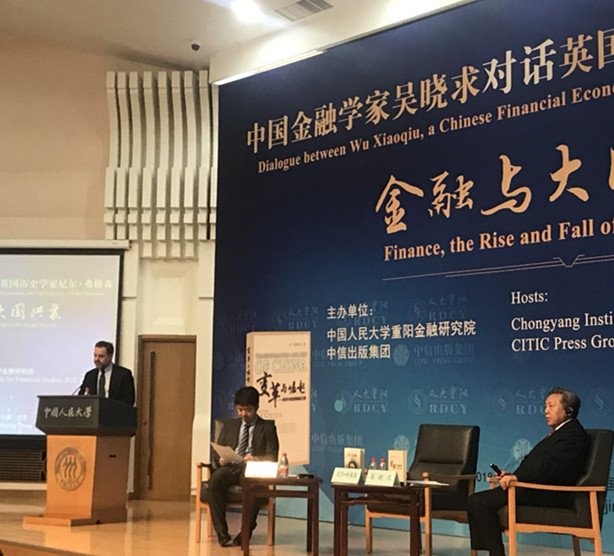 After the breakout of the 2008 financial crisis, many developing countries including BRICS nations began to emerge, pursuing a change in the international order. What is the role of finance on the global order and international community? With increasing trade frictions between the US and China, how should the top two economies of the world get along with each other? People's Daily reporter attended a seminar held at Renmin University of China on April 27.

Here are some excerpts of a dialogue between Niall Ferguson (Ferguson), who is the Milbank Family Senior Fellow at the Hoover Institution, Stanford University and Wu Xiaoqiu (Wu), who is a vice-president of Renmin University of China.

Ferguson: I want to talk about Chimerica, a self-created term. China and America can be combined as an economy, accounting for 13 percent of the global land, one-fourth of the global population and about two-fifths of the global growth. It can be said this economy is the most important global economy.

Sino-US relations have gone through ups and downs. The 2008 financial crisis exerted some negative influence on bilateral relations. And the two countries often have trade frictions.

However, it should be realized that there are some foundations for the bilateral relations, which were formed in 1972 during then US President Richard Nixon's visit to China.

Wu: In today’s world, the China-US relationship is the largest and most important bilateral relations, which in my opinion surpasses the previous US-Soviet relationship.

The Sino-US relationship focuses more on cooperation. Nevertheless, owing to different national conditions and different understanding of trade rules, the two countries face frictions on economy and trade, which is normal. To solve the frictions, holding basic principles for world trade, including negotiations, mutual benefit and free trade is important.

Much thinking is required on the kind of new global order to be built. China has seen its rise, which may lead to challenges to the order formed since WWII, the old interest structure and people’s mentality. The international community should adjust its mentality and viewpoint on this.

Ferguson: We should be careful talking about the relationship between finance and global equality. There are many factors such as education and technology leading to global inequality. Finance can be one of the factors of global inequality, but it is not the main factor.

Global inequality is on the decline, one main reason of which is the rapid economic development of China.

China is developing rapidly because of technology transfer, foreign investment and it makes use of its manpower advantage. China has alleviated a large number of people from poverty in the past 30 years, contributing to global equality. In the process, finance has played its role in promoting economic development.

Wu: Without modern finance, today’s economy would be backward. The major function of finance is to create new technology. Through spreading the risk and innovative financial system, new technologies can become new industries and promote an industry revolution. It means that finance and financial innovation can lead to industry upgrades.

Finance can play a big part in increasing national wealth. In general, finance is an important sign of national competitiveness.