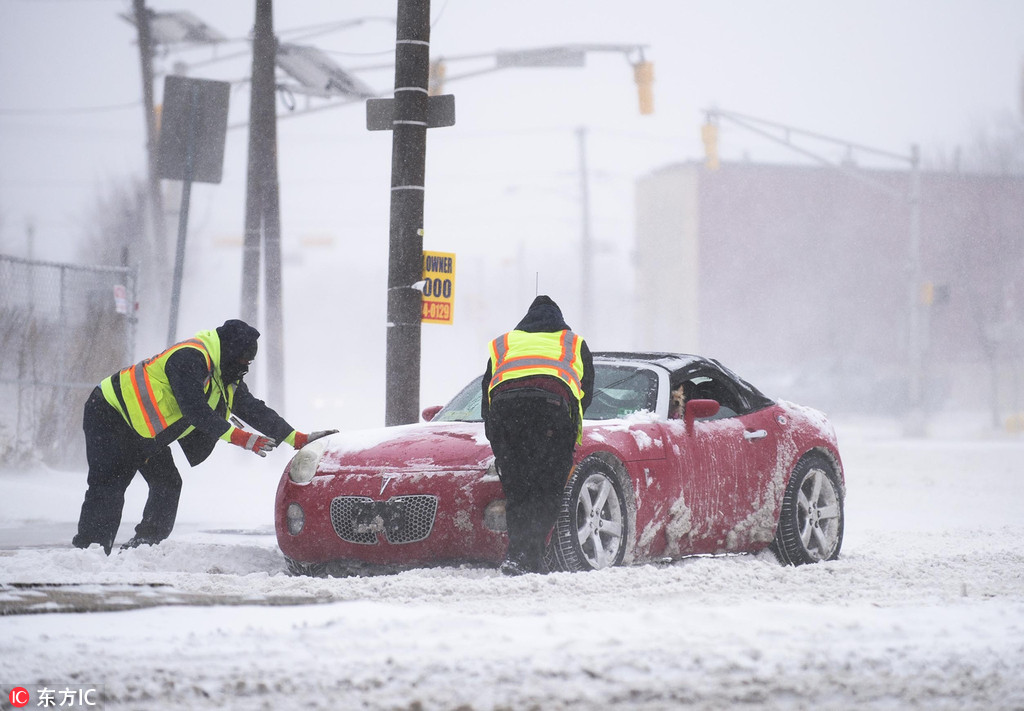 Photo taken on Jan 4, 2018 shows that two men help free a car stuck in the snow near the entrance to the Ben Franklin Bridge as a 'bomb cyclone' brings snowfall in Camden, New Jersey. (Photo: IC)

The National Aeronautics and Space Administration (NASA) said 2017 was the second hottest year since 1880 in terms of the Earth’s global surface temperature. However, despite the rapid warming trend, weather in the Northern and Southern Hemispheres largely differed.

Recently, “bomb cyclone” Grayson hit southeast US, delivering sleet, ice, and snow, which led to a sharp drop in the temperatures in the US East Coast, with a low of -30℃ in some regions.

Photo taken on Jan. 7, 2018 shows that people crowd the beach on Bondi beach in Sydney. The temperatures is set to rise up to 42 degrees on the coast before cooler conditions are expected to reach coastal areas during the afternoon and Sydney's west in the evening. Temperatures in the Sydney were recorded at a record high since 1939. (Photo: IC)

Meanwhile, Australia was suffering from the heat. Sydney’s highest temperature on Jan. 7, 2018 soared to 47.3℃, the hottest in nearly 80 years.

The temperature gap between the North and the South was about 100℃.

The World Meteorological Organization (WMO) said that these extreme weather conditions resulted from global warming. Global warming can change the frequency, intensity, spatial range and duration of extreme weather events and may lead to unprecedented events.

In recent years, extreme weather events have brought many adverse effects to the ecological environment and human health.