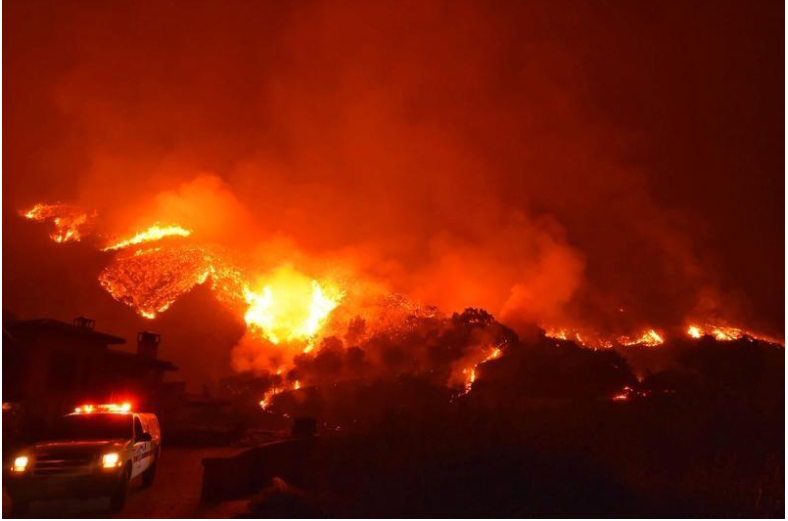 A firefighter was killed while battling a massive wildfire burning in Ventura and Santa Barbara counties, fire officials said on Thursday.

The firefighter was identified only as a California Department of Forestry and Fire Protection (Cal Fire) engineer from San Diego who had been deployed to the so-called Thomas Fire.

“In the meantime, please join me in keeping our fallen firefighter and his loved ones in your prayers,” Pimlott said.

The Thomas Fire, which erupted on Dec. 4 near a small private college in Ojai, has since blackened more than 242,000 acres (97,930 hectares) in Ventura and Santa Barbara, making it the fourth largest wildfire on record in California since 1932. 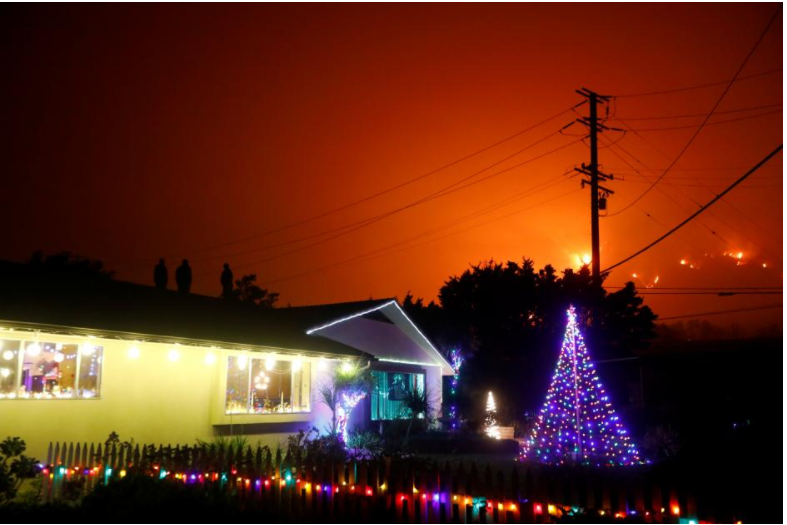 People stand on a roof of a home illuminated with Christmas lights to watch wildfire burn during the Thomas Fire in Santa Barbara county near Carpinteria, California. Photo: REUTERS/Patrick T Fallon

The Thomas Fire, which was 30 percent contained as of Thursday afternoon, has burned 729 homes to the ground and damaged another 175. The blaze has displaced more than 94,000 people.

The wildfire remained a threat to some 18,000 homes and other structures in the communities of Santa Barbara, Carpinteria, Summerland and Montecito along California’s scenic coastline, especially if hot, dry Santa Ana winds return.

Red-flag warnings, issued for extreme fire weather conditions in the area, were extended through Friday morning.

Many public schools in the Santa Barbara area canceled classes this week and will not reopen until the annual winter break ends in January.

Some of the other fires burning over the past week in San Diego and Los Angeles counties have largely been brought under control.

Investigators determined that the Skirball Fire, which destroyed six homes in Los Angeles’ wealthy Bel-Air neighborhood and scorched a building at a winery owned by billionaire media mogul Rupert Murdoch, was started by a cooking fire at a homeless encampment, the Los Angeles Fire Department said earlier this week.

The Lilac Fire, which burned more than 4,000 acres (1,620 hectares) in northern San Diego County and destroyed 157 structures, was 97 percent contained as of Thursday, Cal Fire said.