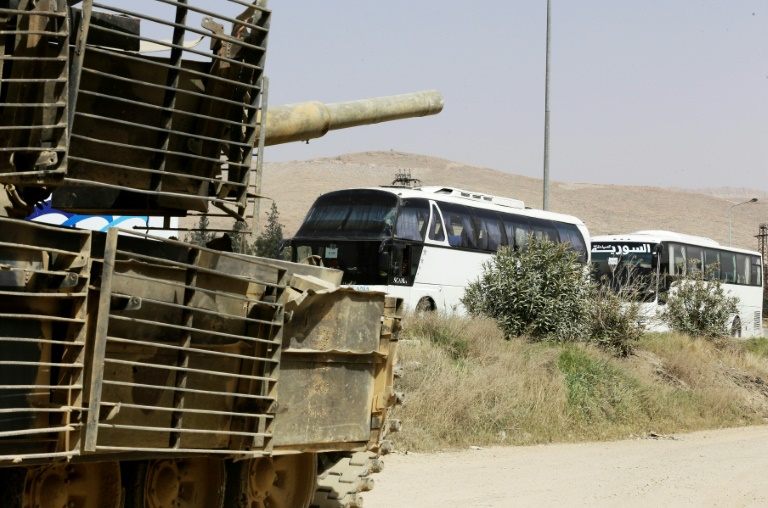 Buses wait at the entrance of Harasta in Eastern Ghouta, near Damascus, on March 22, 2018, after a deal was struck with rebels to evacuate the town after weeks of regime bombardment.(Photo: AFP)

Syrian rebels and their families began leaving Syria's Eastern Ghouta on Thursday under the first evacuation deal in the shrinking opposition enclave outside Damascus.

The agreement, announced on Wednesday and brokered by regime ally Russia, could empty one of three rebel-held pockets in the region and mark a major advance in government efforts to secure the nearby capital.

It could also increase pressure on rebels to follow suit in the two other opposition-held pockets of the besieged enclave, where tens of thousands of civilians remain trapped under relentless bombardment.

State television said around 1,130 people -- including more than 230 fighters -- had boarded buses from the Eastern Ghouta town of Harasta, until now held by the Ahrar al-Sham rebel group.

A military source told AFP the rebels and accompanying civilians had boarded buses and were in a buffer zone, waiting to cross into regime-controlled territory.

Another military source said around 2,000 people are expected to leave in total, including around 700 fighters on Thursday.

They followed renewed air strikes in Ghouta early on Thursday which killed 20 civilians, according to the Britain-based Syrian Observatory for Human Rights.

Since February 18, a devastating Russian-backed offensive on Eastern Ghouta has sliced the shrinking enclave into three isolated pockets.

Central Damascus lies within mortar range of Eastern Ghouta, and the evacuation deal came after the deadliest rebel rocket attack on the capital in months killed 44 civilians on Tuesday.

The regime's offensive on Ghouta has killed more than 1,500 civilians since February 18, according to the Britain-based Syrian Observatory for Human Rights.

The rebels and their families will be transported to the northwestern province of Idlib, which is held by a myriad of jihadist, Islamist and secular groups, many with links to Turkey.

The evacuation from Harasta will further isolate the rebel groups that control the remaining two pockets of Eastern Ghouta and pile pressure on them to accept similar deals.

Syrian Reconciliation Minister Ali Haidar told AFP that Ahrar al-Sham had negotiated with the Russian Centre for Reconciliation and that Damascus was not directly involved.

Nawar Oliver, an analyst at the Turkey-based Omran Centre, said fighters in Harasta "were not able to impose a single one of their conditions".

Opposition figures in Ghouta said talks were under way for a deal to evacuate rebels from the enclave's main town, Douma.

Douma is controlled by the Jaish al-Islam group, while a pocket of territory around the town of Zamalka, closer to the capital, is held by Faylaq al-Rahman with a small jihadist presence.

An AFP reporter in Douma said hundreds of civilians were fleeing the town.

A May 2014 deal saw rebels pull out of third city Homs, once labelled the "capital of the revolution" that sparked Syria's seven-year civil war.

In December 2016, the army retook the whole of second city Aleppo as rebels withdrew in one of their worst defeats of the war.

The assault on Ghouta has a sparked a mass exodus of civilians from the shrinking rebel enclave.

Some 50,000 people have reached shelters in government-controlled territory in the past week, according to the United Nations.

On Wednesday, the UN's humanitarian coordinator in Syria said those displaced were living in "tragic" conditions.

"People may have escaped fighting, fear and insecurity but they find themselves in a place without anywhere to wash themselves," Ali al-Zaatari said.