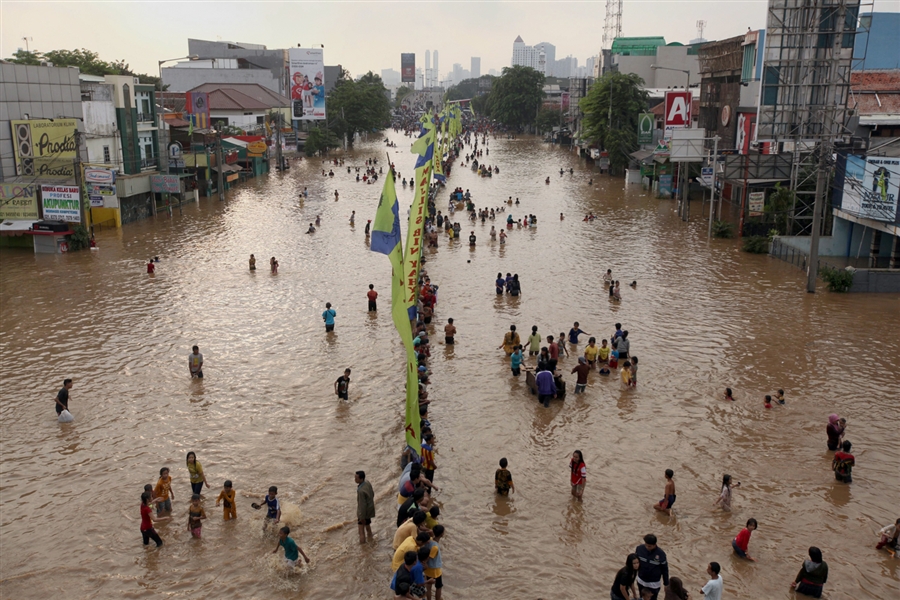 Flooding brought one of Asia’s megacities to a halt on Thursday, as monsoon rainwater in the central business district reached a foot and a half, and almost 10-feet in other parts of the city

Jakarta (People’s Daily)- Indonesia issued a flood warning Monday for residents living on the banks of the Ciliwung River in Jakarta, as the Katulampa Dam in Bogor, near the river's source, is likely to overflow because of heavy rain.

National Disaster Mitigation Agency spokesman Sutopo Purwo Nugroho said in a statement that the situation may potentially lead to flooding in areas near the Ciliwung River banks. He added that the water was likely to inundate several parts of Jakarta.

On Monday night, severe flooding hit a number of Ciliwung riverbank areas in East Jakarta. At least 5,000 people were affected by the floods. The East Jakarta mayoralty has prepared camps to accommodate potential evacuees in case the situation worsens. Heavy downpour on Monday even led to the collapse of two embankments installed in  the West Kelapa Gading subdistrict in North Jakarta.

Torrential rains in Jakarta and West Java on Monday caused landslides on rail tracks and destroyed a rail bridge to the capital city's airport. A car was reportedly trapped underneath the debris. The operation of the airport train connecting the airport to downtown Jakarta was temporarily halted.

Torrential rains in the greater Jakarta area and Bogor caused landslides in at least four places in Bogor's hilly Puncak region on Monday. At least two persons died in the landslides and the route back and forth to Jakarta there was closed.

Jakarta Governor Anies Baswedan yesterday visited the Manggarai sluice gate in Central Jakarta to see whether the water from Bogor was flowing smoothly. During the visit, Anies assured the public that his administration was ready to tackle potential flooding as all three sluice gates in the capital had already been opened.