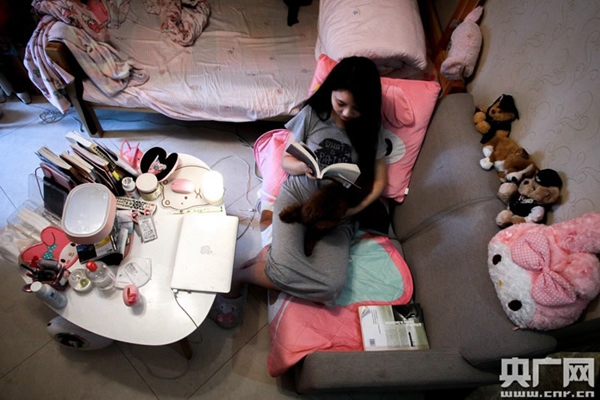 A girl living with her pet in an apartment in Beijing.Photo: CNR

According to the China Statistical Yearbook 2016, today there are more than 20 million young adults who live alone. These young solitary individuals are known as China’s ‘empty-nest’ youth.

“Confined to the room that I rent, a pet is all I can talk with. My computer and mobile phone are my closest friends,” read one message posted online by a Chinese netizen reflecting on his life as an “empty-nester.”

Traditionally, “empty-nesters” are between the ages of 20 to 30, live alone in big cities, experience great pressure due to limited professional skills. They live just above the poverty line, and because they’re broke all of the time, which prevents them from going out and getting involved in social activities.

Factors like the lack of social stability and slim chances for upward mobility are often blamed for having a devastating effect on young people’s momentum and thus fostering the growing number of young empty nesters.

It has become a widely concerned phenomenon in Chinese society.

But Liu Chunling, researcher with the Institute of Sociology at the Chinese Academy of Social Sciences has something different to say about it.

According to Liu, there are a couple of reasons contributing to this phenomenon that has long since been ignored.

Liu believes the constant migration flow from village to city and from city to metropolis is the inevitable result of social development worldwide.

In other words, “empty nesters” are the offspring of modernization.

Additionally, increasing living standards and life expectations have had an influence. Since empty-nest youth are spending more money on eating better food, wearing better clothes, and using high-end digital products, loneliness is no longer the deterrent it used to be.

The survey concluded that though harassed by certain life pressure, empty nesters seem to have a positive attitude about their lives.

The “empty nest” demographic is not only a problem found in China, as Eric Klinenberg wrote in “Going Solo.”

“Today, more than 50 percent of American adults are single, and 31 million—roughly one out of every seven adults—live alone.”