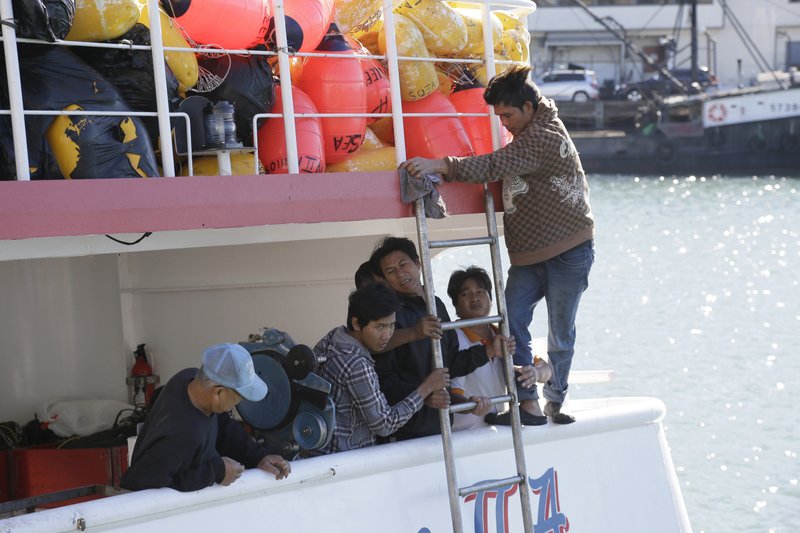 Two Indonesian fishermen who say they were enslaved on an American fishing boat have settled their lawsuit against the vessel’s owner seven years after escaping and receiving special U.S. visas as victims of human trafficking, their lawyers told The Associated Press on Wednesday.

The attorneys said Sorihin, who uses just one name, and Abdul Fatah settled their lawsuit against Thoai Van Nguyen, the California-based owner and captain of the Sea Queen II.

The settlement outlines steps Nguyen must take to continue to fish but does not disclose a financial award. The captain denies all allegations of abuse or human trafficking and has always followed federal laws when employing foreign crews, Nguyen’s attorney said.

The lawsuit filed in U.S. court in San Francisco claimed the men were trafficked through the Hawaii longline fishing fleet and forced to work on the boat around Hawaii and off the shores of California.

Citing federal and international human trafficking laws, the suit sought an unspecified amount of money for fees they paid and compensation they were promised along with damages for mental anguish and pain.

The lawsuit was being prepared as a 2016 Associated Press investigation revealed the Hawaii fleet operates under a loophole in federal law that allows owners to use foreign laborers with no work visas or the ability to legally enter the United States. The lawsuit was in the works when the AP reported on the men’s ordeal.

The workers, mostly from impoverished Southeast Asian and Pacific nations, are required to hand over their passports and confined to boats while working in the U.S., even when docked in Honolulu or San Francisco.

They are generally paid a fraction of what other U.S. commercial fishing crews make, some receiving as little as 70 cents an hour while working up to 20 hours a day.

The AP report revealed instances of abuse and disease while detailing the two men’s account of being exploited, abused and forced to work jobs they had not agreed to.

Ken Bass, Nguyen’s son-in-law who is acting as his attorney, said Saturday that the dispute between Fatah, Sorihin and Nguyen began with the three fishermen getting different contracts from an Indonesian employment firm in 2009. Fatah and Sorihin had contracts to work on a Honolulu-based fishing vessel, Bass said.

He said Nguyen never had any direct dealings with the Indonesian firm but used a middleman in Hawaii who knew how to get workers from Indonesia. The contract Nguyen was given from the Hawaii-based recruiter was different than the paperwork given to Fatah and Sorihin, Bass said.

“So, they basically had different contracts but no one at the time knew that, so that’s immediately going to lead to misunderstanding,” Bass said. “If anybody was culpable, it was the broker in Indonesia.”

But Fatah and Sorihin’s lawyers say it doesn’t matter if there were differences in the contracts.

“The trafficking claims do not rely on the contract provisions,” said Agnieska Fryszman, one of Fatah and Sorihin’s attorneys. “The trafficking statute provides basic protections that apply regardless.”

After the men left the Sea Queen, Bass said Nguyen was forced to pay hefty fines for letting the men escape and that U.S. customs agents threatened to suspend his ability to use foreign workers.

Details of the settlement say Nguyen must disseminate fliers to his foreign crew members, written in their native languages, which outline their rights and ways to contact authorities if they are being exploited.

“This settlement should be a wakeup call to the commercial fishing industry,” Fryszman said. “There’s simply no excuse for turning a blind eye to human trafficking, and we look forward to continuing our efforts to hold others in the industry accountable.”

“The settlement has given me and my family a sense of peace,” Sorihin said in an email. “I hope it will bring better treatment to seamen on the Sea Queen and in the fishing industry.”

Sorihin said he and his family feel at home in the San Francisco Bay Area, where he drives for two ride-hailing companies.

“My wife and I work hard to rebuild our lives here so our children can have a better future,” he said.

Conditions on the boats vary. While some vessels are clean and relatively safe, the AP found some crews living in squalor with sores from bed bugs. There also have been cases of active tuberculosis and low food supplies.

The case highlights concerns from several U.S. lawmakers, human rights advocates and others about foreign workers with no visas in the Pacific fleet. Hundreds of foreign men are confined to their vessels in Hawaii for the duration of their contracts, which are often one or two years at a time.

Lawmakers in Washington are considering legislation to change the situation. The Sustainable Fishing Workforce Protection Act , written by U.S. Sen. Mazie Hirono, a Hawaii Democrat, would allow fishermen to get visas in their home countries, just like other immigrants. They would be protected by federal labor law and could fly into Hawaii to start work, eliminating the need to ship workers by boat.

Under the settlement, Nguyen must provide suitable safety gear for all crew members, ensure adequate food and rest periods — no less than 77 hours in any week of work — and give access to their passports.

He also is required to provide a contract outlining which boats workers will be placed on and how much they will be paid. Contracts must be given to workers in their native language before they leave their home countries.

Nguyen will be required to use reputable labor brokers and is forbidden from doing business with the Hawaii-based recruiter and the Indonesian employment firm he used to hire Fatah and Sorihin.

“I feel more certainty after the settlement,” Fatah said in an email. “I work in retail, and I want to start a new life in San Francisco and create a better future for my family. I hope the captain treats the seamen like what he agreed to.”