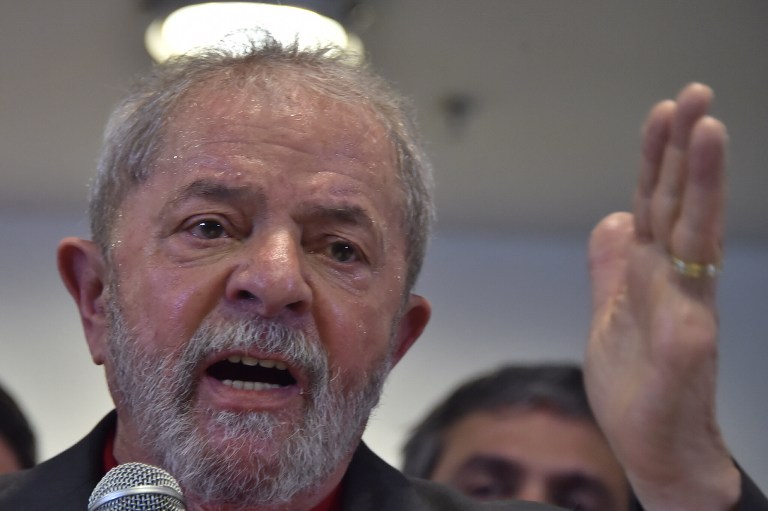 Former Brazilian President Luiz Inacio Lula da Silva refused to turn himself in to the justice authorities before the deadline at 5:00 p.m. local time (2000 GMT) on Friday as ordered.

The former president would remain inside the headquarters of the Metal Workers' Union in Sao Bernardo do Campo near Sao Paulo, where he has been staying since Thursday, and await the federal police, said Lula's defense lawyer Jose Roberto Batochio in an interview with the Folha de Sao Paulo daily.

"There will be no resistance, but he will not go to the slaughterhouse with his head hung low, of his own free will," said Batochio.

"This is not rebellion. It is the right of a person to preserve their liberty and not contribute to any act that could remove it," he continued.

Batochio also filed a motion at the Supreme Court to dismiss the arrest warrant against Lula, but this was rejected.

Also on Friday, the federal court of Curitiba, which oversaw Lula's trial, said that Lula was not being considered a fugitive for the time being, as long as he stayed inside the union headquarters.

Federal judge Sergio Moro set the deadline out of respect for Lula's position as former president and has said he is unwilling to treat him as a fugitive from justice.

This was backed up by Luis Antonio Boudens, president of the federal police, who told the press that "The deadline to present himself voluntarily has been out. As this did not happen, the arrest warrant will now be carried out."

He added that Moro's arrest warrant for Lula had come as a surprise and had now allowed the police to plan how to do it.

"We must now be ready to arrange everything in the best way possible," said Boudens.

On Thursday, the Supreme Federal Court voted 6-5 against a motion of habeas corpus filed by Lula's lawyers, which means that the former president can be arrested and jailed despite the unfinished appeals process.

In July 2017, Moro condemned Lula to 9.5 years in prison for corruption and illicit association. In January, the sentence was extended to 12 years and one month, since the conviction was upheld by an appeals court.