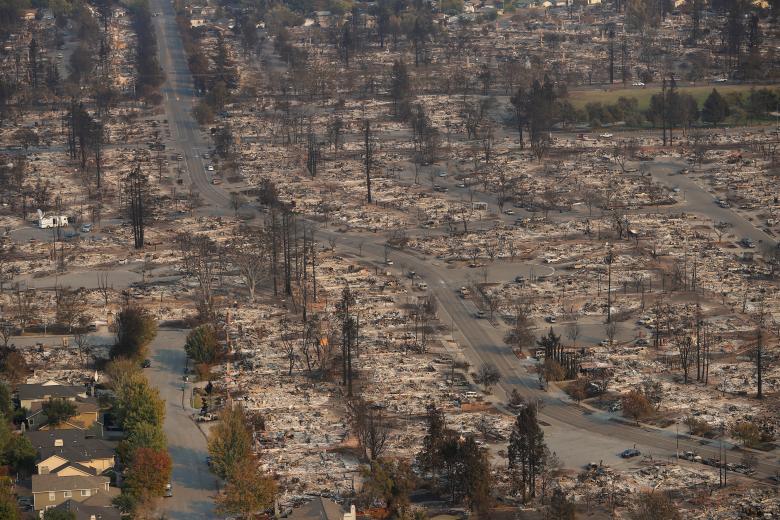 An aerial view of properties destroyed by the Tubbs Fire is seen in Santa Rosa, California, October 11, 2017. REUTERS/Stephan Lam

Dry, warm gusts of wind are forecast for Sunday as firefighters continue to grapple with the deadliest blazes in California’s history, which have killed at least 40 people and reduced entire neighborhoods to ash.

Arid winds would eventually die down on Sunday afternoon, the National Weather Service said, but no rain was forecast to fall on the fires till Wednesday.

The 40 confirmed fatalities, including 22 in Sonoma County, make it California’s deadliest fire since records began, surpassing the 29 deaths from the Griffith Park fire of 1933 in Los Angeles.

Some victims were asleep when flames engulfed their homes, while others were unable to escape as 50-mile-per hour (80 kmh)winds drove the fire faster than they could flee.

With 235 people still missing on Saturday in Sonoma County alone and rubble from thousands of incinerated dwellings yet to be searched, authorities expect the death toll to climb.

Some 100,000 people have been forced from their homes, including 3,000 on Saturday from the city of Santa Rosa, about 50 miles (80 km) north of San Francisco. The fires have damaged or destroyed about 5,700 structures.

“This is truly one of the greatest tragedies that California has ever faced,” California Governor Jerry Brown said on a visit to a devastated city. “The devastation is just unbelievable. It is a horror that no one could have imagined.”

One family described a frantic rush the previous weekend to jolt their neighbors awake before fleeing themselves as flames began engulfing Fountain Grove in Santa Rosa in the middle of the night.

They asked permission to wake people up,” Howard Lasker said of his teenage twins, Benjamin and Natalie. “I gave it to them.”

At least a dozen Napa Valley and Sonoma County wineries were damaged or destroyed, throwing the state’s wine industry and related tourism into disarray.

For the picturesque Napa Valley town of Calistoga, now evacuated, the winds were a double-edged sword. The town was spared by hazardous winds when they shifted, but Mayor Chris Canning warned a resurgence could pose a new threat.

Fire officials said the Tubbs fire, between Calistoga and Santa Rosa, was about 50 percent contained, while another in wine country, the Atlas fire, was at 45 percent. But the Nuns fire west of Napa was only 15 percent contained.

Others, including the Sulphur and the Redwood Valley fires, were at 70 percent and 30 percent containment, respectively, while the Oakmont was at only 10 percent.

Cal Fire estimated the fires would be contained by Oct. 20.

The year’s wildfire season is one of the worst in the country’s history, with nearly 8.6 million acres (3.5 million hectares) burned as of Oct. 13, according to the National Interagency Fire Center. The worst on record for the same period in a year was 9.3 million acres in 2015.