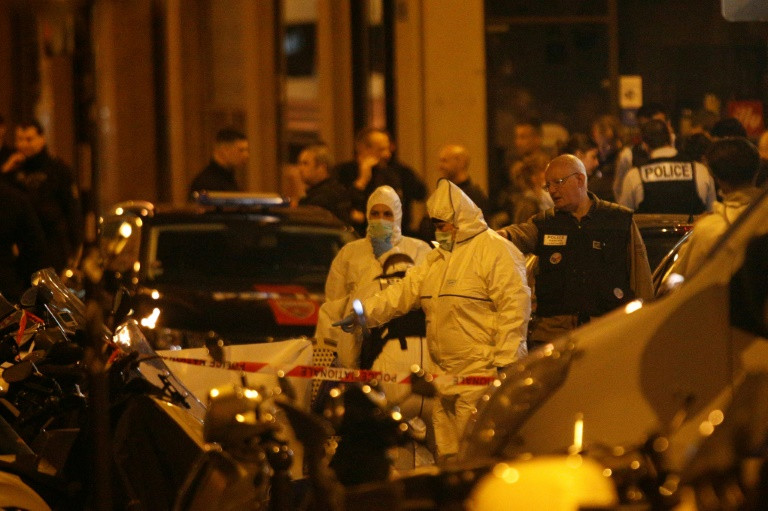 Forensic investigators and police at the scene where a knifeman attacked several people in Paris on Saturday night, killing one man and injuring four other people (Photo: AFP)

Investigators on Sunday were probing the background of a 20-year-old Frenchman born in Chechnya who killed one man and wounded four other people during a stabbing spree in central Paris, for which the Islamic State group claimed responsibility.

The Saturday night attack in a lively area of theatres and restaurants near the city's historic opera house was the latest in a series of apparent Islamist strikes in France that have killed some 245 people since 2015.

Panic broke out on the busy Rue Monsigny with people fleeing into bars and restaurants as the man walked along stabbing people, yelling "Allahu akbar" ("God is greatest") before police shot him dead.

Police identified the assailant as Khamzat A., who grew up with his family in Strasbourg, eastern France, a source close to the inquiry told AFP. The city is home to a large community of refugees from the Muslim Russian republic of Chechnya.

He became a French citizen in 2010 after his mother was naturalised, government spokesman Benjamin Griveaux told French television.

Russian news reports said the Russian embassy in Paris was pressing French officials for more information on the knifeman, whose parents have been taken into custody for questioning in Paris.

Although Khamzat had no criminal record, he had been on both of France's main watchlists for suspected radicals -- the so-called "S file" as well as a more targeted File for the Prevention of Terrorist Radicalisation (FSPRT), which focuses on people judged to be terror threats -- since 2016.

One source said he had been questioned by anti-terror investigators last year "because he knew a man who was in contact with a person who had gone to Syria."

Hundreds of Chechens have joined Islamic militant groups in the Middle East, North Africa and elsewhere in recent years.

The Islamic State group said one of its "soldiers" had carried out the Paris attack, according to the SITE monitoring organisation, but provided no evidence to back their claim.

"I was taking orders and I saw a young woman trying to get into the restaurant in panic," Jonathan, a waiter at a Korean restaurant, told AFP.

The woman was bleeding and a young man fended off the assailant who then ran away, he said.

"The attacker entered a shopping street, I saw him with a knife in his hand," he said. "He looked crazy."

Milan, 19, said he saw "several people in distress" including a woman with wounds to her neck and leg.

"Firemen were giving her first aid. I heard two, three shots and a policeman told me that the man had been overpowered."

A 29-year-old man was killed in the attack, while a Luxembourg man aged 34 and a woman of 54 were seriously wounded and rushed to hospital.

A 26-year-old woman and a man of 31 were slightly wounded.

Interior Minister Gerard Collomb later told reporters that all four people injured were out of danger.

China's Xinhua news agency reported that a Chinese citizen was among the injured, citing the Chinese embassy in Paris.

French President Emmanuel Macron tweeted: "France has once again paid the price in blood but will not give an inch to the enemies of freedom."

The attack again underscored the difficulty in keeping track of suspected extremists by police facing thousands of potential risks, either from homegrown radicals or people who have immigrated to the country.

The FSPRT watchlist alone currently has nearly 20,000 people, of whom about half are under active surveillance.

As has happened after previous suspected jihadist attacks, some lawmakers urged the government to do more to protect people from Islamic extremists.

"Once again we learn that a terrorist was in the S file. What good does this S file do if we don't use it to get these ticking time bombs off French soil," far-right leader Marine Le Pen posted on Twitter.

But Griveaux defended the government's efforts, saying it had foiled 22 planned terror attacks over the past 15 months.

"Unfortunately, there's no such thing as zero risk, and those who say that measures taken out of a hat would fix this problem are lying," he said.

France has suffered a series of major Islamist attacks including the massacre at the satirical newspaper Charlie Hebdo, the November 2015 attacks that killed 130 in Paris, and the 2016 Bastille Day truck attack in Nice that killed more than 80.

There have also been a string of less deadly attacks by lone wolf jihadists wielding knives or guns.

Most of the attacks have either been claimed by the Islamic State group or been carried out in their name.

A state of emergency put in place just after the 2015 Paris attacks was lifted in October when Macron's centrist government passed a new law boosting the powers of security forces.

Thousands of French troops remain on the streets under an anti-terror operation known as Sentinelle, patrolling transport hubs, tourist hotspots and other sensitive sites.