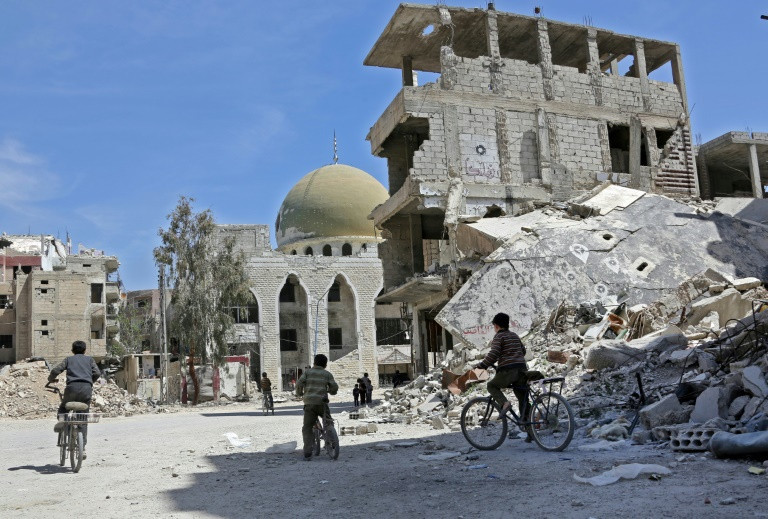 Syrian children ride their bikes past destroyed buildings in the former rebel-held town of Zamalka, in Eastern Ghouta on April 5, 2018. (Photo: AFP)

Backed up by Russia's firepower, Syrian President Bashar al-Assad has ousted his armed opponents from nearly all of Ghouta, their last stronghold on the edge of the capital.

The regime has used a combination of a fierce military onslaught and two negotiated withdrawals to empty out 95 percent of the enclave, but rebels are still entrenched in its largest town of Douma.

But the negotiations crumbled this week and air strikes resumed on Friday, killing 40 civilians according to the Syrian Observatory for Human Rights.

Another eight civilians were killed on Saturday as more bombing raids targeted the town, the Britain-based war monitor said.

It could not confirm whether the strikes were carried out by Syrian government warplanes or those of its ally, Russia.

"The bombing has not stopped. We can't even count all the wounded," said Mohammed, a young doctor inside Douma.

"There are some wounded who we couldn't operate on in time, and they died," he told AFP.

Footage published by the White Helmets civil defence showed rescuers using their bare hands to pull back dirt and tiles in a bombed-out house, eventually freeing a young man trapped underneath.

As they stood him up, the rescuers looked up at the sky where the roar of a warplane could be heard.

'Douma is the end'

Syrian troops matched their renewed bombing with a ground operation in the orchards surrounding Douma, with state TV saying they had "stormed" the fields.

"The regime is trying to tighten the noose around Douma from the west, east, and south," said Observatory head Rami Abdel Rahman.

State television broadcast live footage from a hospital in Damascus, where pools of blood stained the floor and wounded could be heard wailing in pain.

One woman cried over the lifeless body of a young man on a stretcher. Another said she had been riding in a taxi when the shelling started, and the car crashed head-on into a wall.

The barrage of rockets on western parts of Damascus kept Wafaa Khalaf, 26, locked at home on Saturday.

"I'm not willing to get injured as this war is coming to an end. I don't want the last person killed to be me," she told AFP.

Assad is keen to recapture Ghouta to eliminate the opposition from the outskirts of Damascus and end years of rocket fire on the capital.

Abbas, a retired 57-year-old Syrian man, said his neighbourhood in the capital's west was hit hard on Saturday.

"It looks like Douma is the end of the story, and endings are always hard," he told AFP.

"We've been waiting for this for years, whether in Ghouta or in Damascus," said Abbas.

Since February 18, the regime's Ghouta offensive has killed more than 1,600 civilians and sliced the area into three isolated pockets, each held by different rebel factions.

The first two were evacuated under Russian-brokered deals last month that saw more than 46,000 rebels and civilians bussed to opposition-held Idlib province in the northwest.

Moscow also stepped in to negotiate a deal for Douma, the third and final pocket where Jaish al-Islam had been angling for a reconciliation agreement that would allow its members to remain as a police force.

Following a preliminary accord announced by Russia on Sunday, nearly 3,000 fighters and civilians were evacuated from Douma to northern Syria.

But as talks dragged on, Syria and its Russian ally threatened Jaish al-Islam with a renewed military assault if the group did not agree to withdraw.

It remains unclear exactly why the talks fell apart this week.

SANA said they faltered when the rebel group refused to release detainees it is holding in Douma, warning the military assault would only stop if hostages are released.

Others have pointed to internal rebel divisions over the withdrawal process.

Top Jaish al-Islam political figure Mohammad Alloush on Friday said the talks had been going "well" until a power struggle emerged between the regime's allies.

"The negotiations failed and the regime wants its conditions -- the air strikes are a taste of what could happen if its conditions are not implemented," he said.