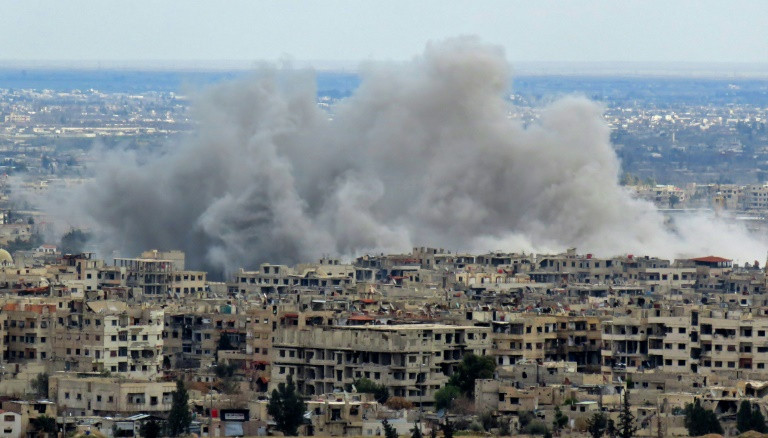 A general view taken from a government-held area in Damascus shows smoke rising from the rebel-held enclave of Eastern Ghouta on the outskirts of the Syrian capital following fresh air strikes and rocket fire on February 27, 2018.AFP / STRINGER

A humanitarian "pause" announced by Russia in Syria's deadly bombardment of Eastern Ghouta struggled to take hold Tuesday, with fresh violence erupting and no sign of aid deliveries or residents leaving the besieged enclave.

Nine days after Russian-backed regime forces intensified their campaign against the rebel-held enclave, the deal offered some respite to civilians who had been cowering in their basements.

But the first day of a five-hour daily "pause" that was announced by Russia and kicked off at 9:00 am (0700 GMT) was marred by fresh violence that saw at least six civilians killed.

Moscow's plan falls short of a broader 30-day ceasefire which was voted by the United Nations but has yet to take effect, and has inspired little trust from among the besieged enclave's 400,000 residents.

The regime deployed buses at the Al-Wafideen checkpoint to transport residents wanting to use a humanitarian corridor to flee what UN chief Antonio Guterres last called "hell on earth". 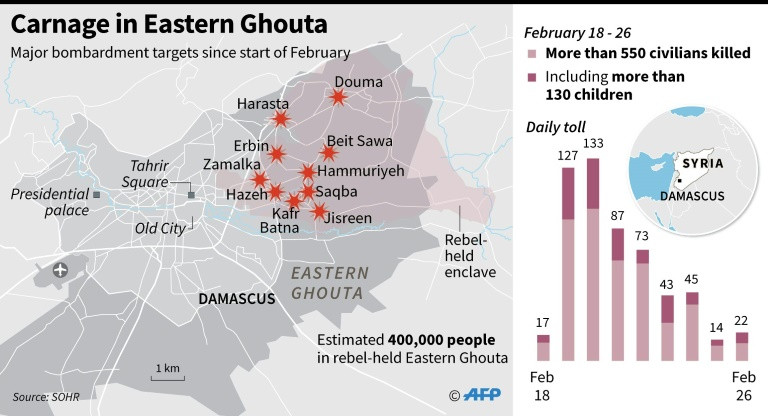 But no civilians were seen venturing towards the regime forces guarding the checkpoint, where large portraits of Syrian President Bashar al-Assad and Russian President Vladimir Putin could be seen side-by-side.

State news agency SANA accused armed groups in Eastern Ghouta of firing several rockets on the path of the corridor.

It singled out the former Al-Qaeda affiliate present in some parts of the enclave, accusing it of blocking civilians "to use them as human shields".

Some residents left the basements they had been cowering in for days to check on their property and buy food. 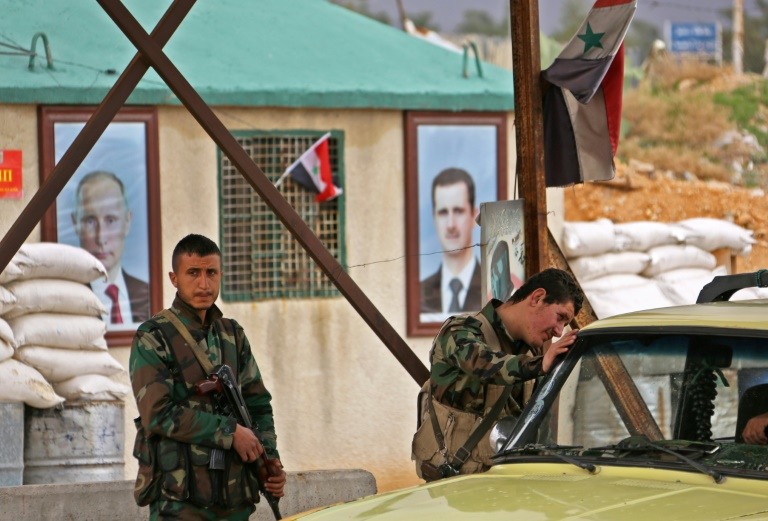 Syrian government forces stand at a checkpoint on the outskirts of Damascus neighbouring the rebel-held Eastern Ghouta region on February 27, 2018.AFP / STRINGER

But many in the enclave, which lies on the eastern outskirts of the Syrian capital, appeared distrustful of a "pause" announced by Damascus's main ally.

"This Russian truce is a farce. Russia is killing us and bombing us every day," said Samer al-Buaidhani, a 25-year-old from Douma, Eastern Ghouta's main hub.

"I don't believe it's safe for me or my family to leave by this system," he told AFP.

"Under international humanitarian law, humanitarian corridors are things which need to be well planned and must be implemented with the consent of parties on all sides, not only with one side," she said.

More than 550 civilians, almost a quarter of them children, have been killed since February 18 in the Syrian and Russian bombardment of Eastern Ghouta, making it one of the bloodiest episodes of the country's seven-year-old conflict.

Violence levels were significantly lower on Tuesday as the "humanitarian pause" kicked in but six civilians were killed by regime bombardment, according to the Syrian Observatory for Human Rights monitoring group.

Two of the victims were killed before the declared five-hour window, two during and two after, the Britain-based group said, adding that the bombardment intensified again after 2:00 pm (1200 GMT).

In Hammuriyeh, another town in the sprawling semi-rural enclave, Mohammed Abdullah said the pause left civilians with a choice between two evils.

"The truce is not in the people's interest, we have two options: death or displacement," said the 30-year-old.

"The campaign we were targeted with was an extermination campaign, not a simple bombardment. What we want is a full and permanent ceasefire for all of Ghouta," he said.

That sentiment was echoed by the dominant rebel groups in Eastern Ghouta, who sent a letter to the United Nations stating their willingness to expel jihadists as soon as a full ceasefire takes effect.

The Russian-backed daily five-hour "pause" falls short of a broader month-long ceasefire voted by the UN Security Council on Saturday. 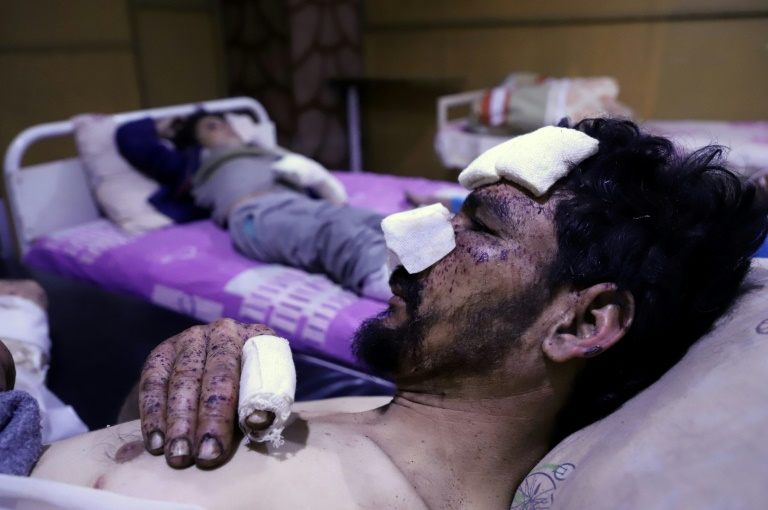 More than 500 people have been killed in the latest strikes on rebel held Eastern Ghouta .AFP / AMER ALMOHIBANY

Hayat Tahrir al-Sham, a group made up mostly of fighters from Al-Qaeda's ex-affiliate Al-Nusra Front, is present in some parts of the enclave.

The letter said such an evacuation, which has been discussed previously but never yielded any result, would take 15 days and start when a UN truce takes effect.

Russian Foreign Minister Sergei Lavrov reacted cautiously to the statement and said after meeting French counterpart Jean-Yves Le Drian that the ball was in the rebel groups' court.

"We shall see in practice whether the pleas by the three illegal armed groups... to carry out the UNSC resolution correspond with their intentions," he said.

The Syrian government lost control of Eastern Ghouta in 2012 and has besieged it almost ever since.

The scenario put in place by the regime and its Russian ally was reminiscent of the deal that ended the battle of Aleppo in 2016.

Few civilians back then initially used the Aleppo corridors unilaterally announced by Russia.

Some started fleeing after renewed bombardment and the rest eventually evacuated when a multilateral deal was reached with Turkey.