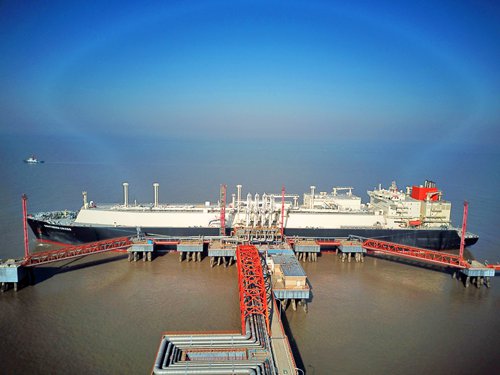 Experts said that China's energy security will be improved via diversity after a Kazakhstan gas operator announced on Monday that the Central Asian country will boost its natural gas supply via pipelines to China to 10 billion cubic meters (bcm) a year. The development follows an announcement by Kazakhstan in October 2017 that it would export 5 bcm of natural gas annually to China.The Kazak national operator, KazTransGas JSC, has reportedly begun exporting natural gas to China from fields in western Kazakhstan as well as from its underground natural gas storage facilities starting from October last year. "The increase to 10 bcm a year from Kazakhstan will be helpful to address China's natural gas shortages, such as the one that has taken place this winter. The additional 5 bcm is a significant addition to the 30 bcm overall import volume currently coming from Central Asia," said Jin Lei, an associate professor at the China University of Petroleum."The region is also stable and peaceful, which ensures security for China's energy supplies," Jin told the Global Times on Tuesday.Jin said China's reliance on natural gas imports in 2016 represented about 34 percent of its demand. Domestic output in 2016 increased 1.7 percent but imports grew 22 percent. "These trends mean China's natural gas supply pattern will follow that of crude and be increasingly reliant on overseas sources," said Jin. China's natural gas imports, including that arriving via pipelines as well as liquefied natural gas (LNG), reached a record high of 68.57 million tons in 2017, up 27 percent year-on-year, data from the General Administration of Customs showed in January. A ton of natural gas roughly translates to 1,380 cubic meters.In addition to Central Asia, China also imports pipeline-borne natural gas from Myanmar via Southwest China's Yunnan Province, has plans to import from Russia via Northeast China, and imports LNG through its ports along the eastern coast. China imports about 4.5 bcm of natural gas a year from Myanmar in recent years."Prices of Central Asian gas are also lower than supplies from Russia, though I have no specific numbers," Jin said. Li Li, director of research at Shanghai-based research and consulting firm ICIS China, expressed caution, noting that such large import increases will involve large-scale infrastructure work that may take a long time. "Infrastructure work in partner countries may take an even longer time," Li said. "Overall, it would probably take until 2020 to fully tap the benefits of this planned increase. Meanwhile, to address gas shortages, the nation must rely on LNG and a coastal infrastructure buildup in the short term," Li told the Global Times Tuesday.China and Russia signed a 30-year deal in 2014 involving imports by the former of 38 bcm of gas annually. But pipeline construction is still underway. Jin said China has a wide mix of suppliers of LNG, including Australia, Qatar, Indonesia, Malaysia and potential US Alaskan gas as a result of US President Donald Trump's China visit. "However, the LNG price is more prone to market fluctuations," Jin noted."Having a diversified mix of suppliers will give China some pricing power and guarantee China's energy security," noted Jin.