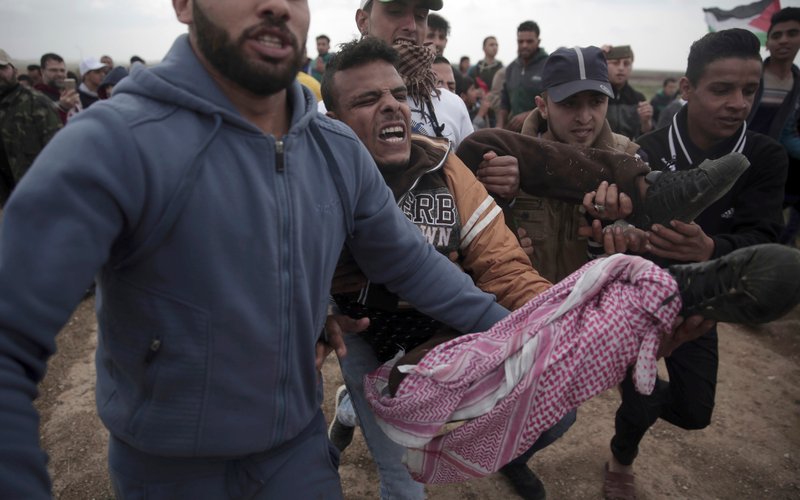 The flareup of deadly violence in Gaza is of a new kind, even in the inventive annals of Mideast conflicts: Israeli soldiers shooting at Palestinian demonstrators burning tires and hurling firebombs across what looks like an international border, inflicting casualties while claiming concerns of a mass breach of the barrier.

But viewed another way, it’s just the latest reflection of basic facts on the ground: the situation for the 2 million people of Gaza is extraordinarily harsh and difficult to resolve. It’s not surprising so many would risk death by converging on the border fence, which has now happened three Fridays in a row, with dozens killed and hundreds injured.

By and large the people of Gaza — over two-thirds of them descended from refugees who left communities in what is now Israel — cannot leave their tiny strip of arid land along the Mediterranean coast. Anger toward Israel runs deep, yet dependence is great.

Israel blocks Gazans to the north and east, controlling who and what goes in and out. It blockades their waters to the west and prevents construction of sea and airports, with Egypt completing the blockade to the south.

Israel’s argument is that Hamas, the militant group that controls Gaza, will use materials that come into the strip for building rockets, making bombs and digging attack tunnels. The fear is well-founded.

Israel also severely restricts Gazans leaving the territory in a policy it defends on security grounds, but which often looks punitive. Every exit, even to cross Israel en route to Jordan and beyond for medical, academic, professional or personal purposes, requires the approval of Israel — or Egypt, where the anti-Islamist government also deeply distrusts Hamas.

Israel and the West Bank-based Palestinian Authority, expelled by Hamas from Gaza in 2007, largely control power supplies. There are just a few hours of electricity a day.

Hamas remains committed to conflict with Israel, and attempts to pressure the population against Hamas are questionable. Gazans simply don’t have the means to overthrow the well-armed group, even if they wanted.

Meanwhile, half the strip’s workforce is unemployed. Much of the vast destruction from the last war with Israel, in 2014, still has not been rebuilt. Public entertainment is almost nonexistent and alcohol, in the name of Islam, is banned.

Adding insult to injury, the Palestinians do not have a currency. The few bills of cash in Gazan pockets are Israeli shekels emblazoned with the likenesses of Jewish religious and Zionist political figures.

Hamas says the border protests will continue through May 15, the anniversary of Israel’s founding and a day of mourning for the Palestinians to mark their mass displacement during the war surrounding Israel’s creation. It has signaled it may attempt a mass border breach, just as Israel fears. With Israel digging in its heels, and only muted debate in Israel over the high casualty count, bloodshed is likely to continue.

Here’s a look at how the players in this tragic scenario have reached this point:

Hamas rose to global prominence with 1990s suicide bombings aimed at scuttling the Israeli-Palestinian peace process and during the second Palestinian uprising in the early 2000s, killing hundreds of Israelis. It built up a formidable arsenal of rockets and other weapons. Israel’s unilateral withdrawal from Gaza in 2005, ending a 38-year military presence, cleared the way for Hamas to violently seize control of Gaza in 2007 from its rival, the internationally recognized Palestinian Authority, a year after winning elections..

Israel, which along with its Western allies considers Hamas a terrorist group, blockaded the territory along with Egypt, battering the meager economy. Jobs are hard to come by, Gaza’s beaches are polluted by untreated sewage and tap water is undrinkable. Hamas, meanwhile, stifles dissent, bans public gatherings and promotes its conservative Islamic values.

Hamas also has fought three wars with Israel, sparked in part by sustained rocket fire on Israel. Israel, the Palestinian Authority and the international community have called on Hamas to disarm. But the group, founded in the late 1980s as a branch of the regionwide Muslim Brotherhood, has held on to its violent ideology, even as conditions deteriorate.

Israel claims some humanitarian credit for keeping border crossings open, allowing food, consumer goods and some construction materials to flow into the territory and some Gazans to leave. But sweeping export restrictions cripple the economy, and getting a travel permit is extremely difficult. Applicants are often called in for interrogations by Israel’s Shin Bet security agency. Many are rejected on vague security grounds without explanation.

Israel says it does its best to ease the blockade given the security challenges. It accuses Hamas of trying to exploit and recruit civilians — a charge Hamas reciprocates against Israel.

During the three wars over the past decade, Israel inflicted heavy damage on Hamas, but also came under intense international criticism for the high civilian death toll and vast damage to Gaza’s infrastructure. Toppling Hamas seems unlikely and the prospect of another war, with its uncertain results, has little appeal to Israel — as does renewed full occupation.

For years, Egypt played a double game with Gaza, restricting travel through its borders while tolerating a thriving cross-border smuggling industry. This allowed Hamas to sneak in weapons and consumer goods, enriching supporters who operated the tunnels and undermining the Israeli blockade.

Since taking power in 2014, Egypt’s President Abdel-Fattah el-Sissi has taken a tougher line. He cracked down on the smuggling and largely shuttered Gaza’s border crossing with Egypt, traditionally the main exit point for Gazans traveling abroad. Last year, the border was open for just over 30 days.

Egypt has defended its actions on security grounds, noting it’s fighting an Islamic insurgency in Sinai, along Gaza’s border. At times, it has accused Hamas of aiding militants in Egypt.

But el-Sissi’s tough policies and close security relations with Israel have hurt his credibility as a broker between Hamas and the Palestinian Authority. Repeated reconciliation attempts, sponsored by Egypt, have failed.

For years, President Mahmoud Abbas, based in the West Bank, tried to retain influence in Gaza by paying salaries to tens of thousands of former civil servants and funding fuel shipments from Israel to generate Gaza’s electricity. The unintended result: Abbas provided a safety net that helped keep Hamas in power.

A frustrated Abbas has taken a tougher line over the past year, scaling back electricity subsidies, reducing salaries of his former employees and now threatening to cut them off altogether.

These tough measures have added to the hardship in Gaza but had little effect on Hamas. A renewed attempt at reconciliation has deadlocked over Hamas’ refusal to disarm, collapsing last month after a bombing on the convoy of Abbas’ prime minister during a stop in Gaza.

Much of the international donor community has boycotted Hamas, branded as a terrorist group. But it has also poured hundreds of millions of dollars of humanitarian aid into Gaza, at times at Israel’s request, in effect propping up Hamas. With little to show for their efforts, weary donors have scaled back their contributions in recent years and given a lukewarm response to Israel’s latest appeal to send more aid.

The U.S. has also cut some $300 million in money for UNWRA, the U.N. agency for Palestinian refugees and their descendants. Over half of Gaza’s people rely on UNRWA for assistance. The agency is now scrambling to try to make up the funding gap, raising the danger of a new humanitarian crisis.