Girl arrested in LA school middle shooting believed to be 12 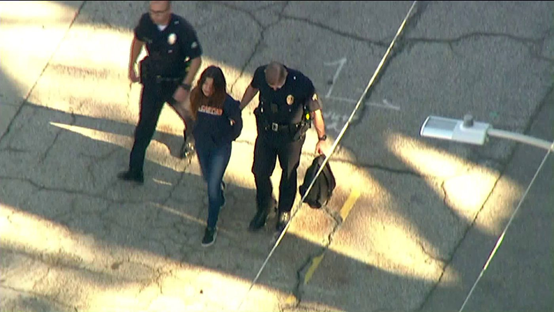 A 12-year-old girl opened fire Thurday was arrested by the police. (Photos: AP)

A girl believed to be 12 years old opened fire Thursday in a middle school classroom, critically wounding one classmate and injuring three others, authorities said.

Police arrested the girl and recovered a gun after the shooting that happened just before 9 a.m. at Salvador B. Castro Middle School near downtown, said Steve Zipperman, chief of the Los Angeles Unified School District police force. A possible motive was not identified as the investigation was in its early stages.

News footage showed a dark-haired girl in a sweatshirt being led from the school in handcuffs as anxious parents gathered on a street corner, talking on their phones and awaiting word about their children.

“I’m just hoping it has nothing to do with him,” said Gloria Echeverria, as she waited for news about her 13-year-old son. “I’m just scared for all the kids — school is supposed to be a safe place for them, and apparently it’s not.”

Claudia Anzueto said her 12-year-old son was crying when he called her from a borrowed cellphone. He said he was next door to the classroom where the shooting happened, heard a gunshot and knew the suspect.

The district has a policy that requires every middle and high school campus to conduct daily random searches by metal-detector wands at different hours of the school day for students in the sixth grade and up. Officials have not said whether students at the school were subject to any weapons screening Thursday.

“Not safe, very insecure,” said Anzueto, who said there were no metal detectors at the school. “I fear for my son’s life. You know what I mean, you really hear about things like this in the news, and just to hear that something like that happened so close to home, it scared the life out of me.”

Melanie Valencia, 13, said the school did a random security search Thursday, but she’s never been searched. 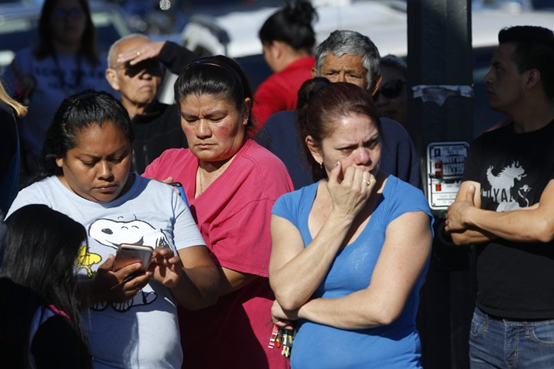 Parents wait for news of students at the Belmont High School in Los Angeles Thursday, Feb. 1, 2018.

“It’s crazy because I don’t know how she got the gun,” she said.

The most seriously injured victim, a 15-year-old boy shot in the head, was taken to Los Angeles County-USC Medical Center and remained in intensive care during the afternoon but was doing well.

“This child was extremely lucky,” said Dr. Aaron Strumwasser, a trauma surgeon. “The trajectory of the bullet did not hit any vital structures that were an immediate threat to life.”

A 15-year-old girl with a gunshot wound to the wrist was hospitalized in fair condition. An 11-year-old boy and a 12-year-old girl were grazed and were treated and released from the hospital. A 30-year-old woman injured was not hospitalized and the nature of her injury was not immediately known.

The school’s campus remained on lockdown later in the morning but had been declared safe, Zipperman said.

“We will attend to the needs of these students who witnessed this very carefully, with the understanding this is very traumatic,” he said. “We have our school mental health folks that are here to support the needs of the students.”

Castro has about 365 students in grades 6-8 and almost all are Hispanic and many are from low-income families.

At a school event last month where good attendance certificates were presented, Principal Erick Mitchell said the campus was becoming a destination for families who wanted a smaller school setting, the Los Angeles Times reported. Castro said an emphasis at the school on long-term goals such as college and careers had improved student behavior, he said.

“We have a new culture here,” Mitchell said at the time. “I love this school. We have really good kids here. It’s the best-kept secret in town.”