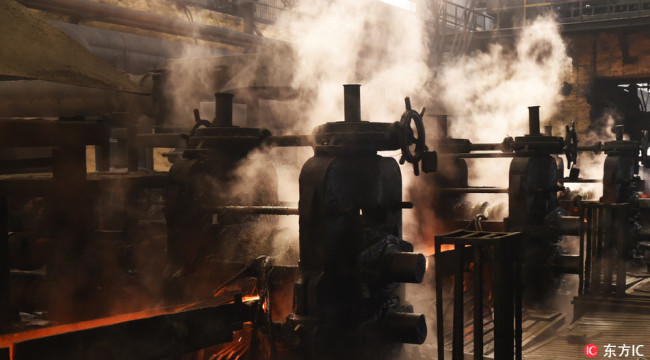 Inside a steel plant in Zouping, Shandong Province. (Photo: IC)

Ottawa (People's Daily) - Accusations of the so-called dumping of Chinese steel to Canada are groundless and that China is also a victim of trade protectionism, said the Chinese Embassy in Canada Thursday.

Canada imported $9.55 billion of steel from all over the world in 2017, of which about $940 million dollars were from China, accounting for only 9.8% of the total. By contrast, about U$ 5.58 billion were imported from the US, which accounted for 58.4% of the total.

According to reports by Canadian media, Canada's steel exports to the US accounts for 17% of US steel import every year, ranking the most.

Canadian data also shows that China's steel to Canada decreased significantly in 2015 and 2016 and picked up only in 2017.

The spokesperson said that we understand Canada's feelings to avoid the US trade sanctions, but it is not right to drop stones on someone who has fallen into a well, or even push others to the front as a bullet shield.

In response to the accusation that China may dump steel to Canada, the spokesperson of the Chinese Embassy in Ottawa said that China was the victim of trade protectionism. However, some Canadians viewed China as a "bad offender" and China has been attacked by some Canadians for the possible dumping of steel into Canadian market.

Recently some Canadian parliamentarians called for the Canada government to "take immediate action...... so China doesn't use as a backdoor" to export steel to the US. They believe that only after Canada addresses the fears of some Americans that China is using Canada as entry point to flood the US with Chinese steel, then the American threat of tariffs and a permanent exemption will be gone.